Mistletoe in a tree by the River Claise. 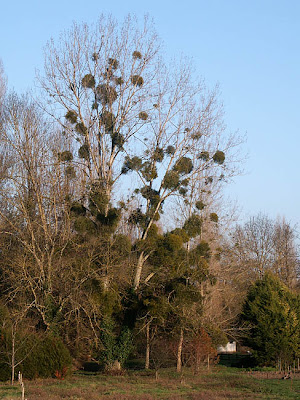 Mistletoe Viscum album is a parasitic woody shrub with leathery blunt tipped leaves. The flowers, such as they are, appear in the early spring, and are followed eventually by sticky white berries early in the wintertime. In a completely natural habitat, Mistletoe only grows along riverbanks or in open woodland, but the main habitat here is Poplar Populus sp plantations. The parasite is not actually that fussy about host species but because of its requirement for space around the tree it is very much more common in orchards, gardens and plantations created by man with well spaced, domesticated trees.

Mistletoe in a Poplar plantation. 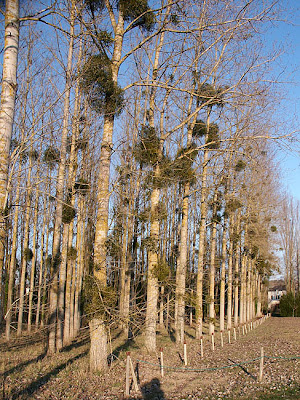 It is a lowland plant, seeming to require a climate with hot summers and cold winters. Unlike some mistletoes, V. album does not usually kill its host tree, although in abandoned orchards the lack of regular pruning can mean that the Mistletoe becomes so abundant the aging trees can no longer support it. A heavily infested tree will have reduced foliage of its own, have to compete for the available water and be subjected to considerably more wind rock.

Mistletoe in the Brenne. 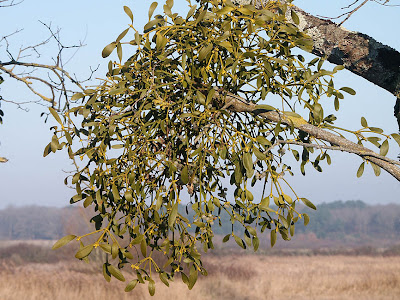 Even though few birds are attracted to the white mistletoe berries, birds are the main means the plant spreads. Thrushes such as Mistle Thrush Turdus viscivorus swallow the berries whole and excrete the seeds, along with some of the sticky pulp, about 20 minutes after ingestion. Some seeds stick to a branch where they can germinate, but most will hang down on a slimy 'thread', where they will dry out and die (see our previous post about Mistletoe). The Blackcap Sylvia atricapilla, a type of warbler, will also eat the berries. They manipulate the berries to remove the seeds before they swallow the pulp, wiping the seed off their bill onto a branch. This method means that far more of these seeds will germinate.

Close up to show the berries. 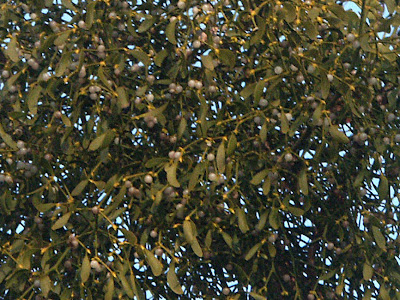 It is possible that the species will move north if European winters warm up due to climate change. More and more Blackcaps are now overwintering in Europe rather than making the journey to Africa, and they may be a vector for both pushing the distribution of the plant northwards and making it increasingly abundant. As yet the scientists say it is too early to tell if the change in Blackcaps behaviour is causing a change in the Mistletoe, but they are gathering data.

Something worth mentioning, Susan, is that Mistletoe seems to be a bit host species dependant. I am, in the new year,going to collect some "seed and slime" from some Hawthorns on the side the D103 to send to an environmentalist and gardener in the UK. He has found that ONLY seed from other apple species will develop on his apple trees. Willow, oak and poplar gathered doesn't seem to have any success. The Hawthorn gathered seed is to test whether or not another Rosacea species will germinate as successfully on the apples. He will be trying it on hawthorn at the same time to test germination rates.
Thought you'd like to know.

Tim: that could be connected to the fact that birds don't take the seeds very far - usually the neighbouring tree. As the neighbouring tree is likely to be the same species as the one the mistletoe was in, perhaps the link to a particular species gets stronger with each generation.

I'll mention that to Andy.... and try some of the same batch on our willows... poplars being the nearest possible host along that stretch of the Aigronne.

The WV is "rablogi" so raise a glass to blogging!