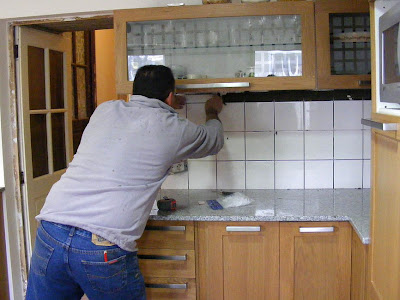 Patrick did the work for us and they gave him a bit of trouble. The tiles are only 4 mm thick and rather prone to cracking if they needed cutting to shape. A number of times I heard 'Putain ! C'est pas possible !' which meant that a second attempt at cutting a tile to go around an electrical plug socket had cracked. He says they are fine once they are safely glued to the wall though.

The finished tiles in situ. 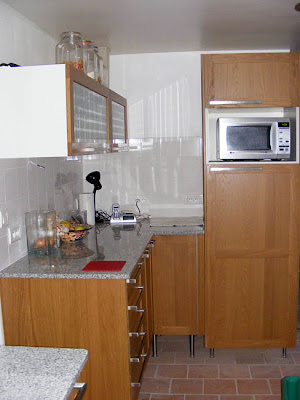 We used a white plastic edge strip to run along the top and cover the raw edges of the tiles. This seems to be how it is done these days, rather than use expensive bullnosed edge tiles.

Hurricane Joachim: For those of you who read Ken and Walt's blogs, you will have noticed they didn't post this morning. We phoned them at 9am and they said they and the houses around them at the top of the hill don't have power. If the electricity isn't restored by lunchtime we will go up with our generator for them. We've had a lot of wind and rain (more than any other rain episode this year) and lots of little brownouts. We lost the internet for a couple of hours yesterday morning. No damage here in town that I know of though, unlike Xynthia in February 2010 when the streets were littered with roofing materials. The weather today is beautiful.
Posted by Susan at 09:00

Now that looks nice and shiny!
When I get round to the tiles behind the sink in the kitchen, I'll be using a quarter-round strip of wood above a strip of mosaic tiles to finish off. Just a way of putting colour into the space... but Pauline's not decided on which colourway yet... everthing like that that we do just evolves.........

You sound as though you didn't have a problem yesterday? We had real watermeadows here... but they've receeded now.

Tiling (and the units!) look fabulous! I can't believe the difference it makes.

And as for the weather, ours has cleared up too. Such is life. Luckily, no damage done. Hope it was the same for you. Can't believe the difference between yesterday morning and today!

Hi Simon and Susan,
It's neat of you to take your generator to Ken and Walt so they can relate again to the whole world. As you said they have heat in the living room and a Butane gas range for cooking. They're not going to open the refrigerator or the freezer too often, though. Glad you didn't have to go through this kind of ordeal.

Sorry to hear about Ken and Walt - how thoughtful of you to help them out....hope they are switched on again soon.

Another step along the way. The tiles and worktop look great together.

You must be really happy how the kitchen turned out as it is really pretty.

The kitchen looks wonderful. It's so nice to see the progress you are amking. hope the paint dries soon.

sorry about the typo - should have said the progress you are making!