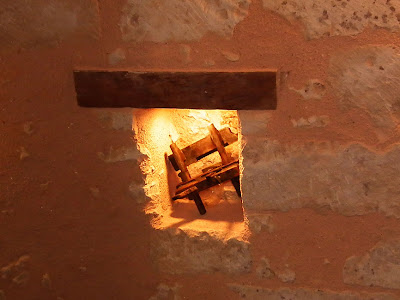 Just recently my parents sent me a family heirloom. Dad told me it is a plough plane that was owned and used by my mother's father and his father. It was made in England, from Boxwood with a handmade steel blade and nicker blade, brass screws and fittings and dates from sometime in the second half of the 19th century. The nicker blade precedes the main blade and ensures a clean edge to the cut, especially working across the grain. One end is stamped W.G. Mold (my great-grandfather) and W. Beal. At first I thought W. Beal must be the maker, as this name stamp is in the position makers names normally appear, but my parents have another plane stamped with a known manufacturer, Martin & Shaw, and W. Beal, so we think W. Beal must be a previous owner, not a toolmaker. It would have been handmade but most likely in a professional tool making workshop, although many craftsmen made tools for themselves from time to time too. It appears to be in full working order - many of these planes lose their nicker blades over time as they were sometimes a nuisance if you were not cutting across the grain and would be removed and mislaid.

Looking down on the plane. 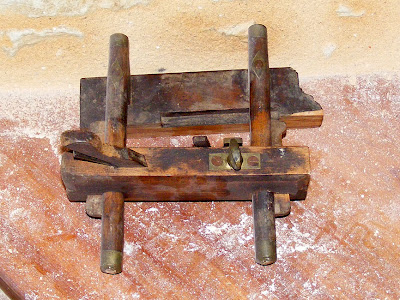 Plough planes are an early type of router, used to make grooves, but talking to Stéphane and my research on the internet suggests that Grandpa's plane is actually a type of rabbet (rebate) plane, probably used to make the rebates on the edges of doors. Cabinetmakers and joiners such as my grandfather would have had a considerable set of planes with different profiles and for slightly different jobs. According to my father there are about 18 of them left but there may once have been many more. Some we know were destroyed in a bushfire in the 1960s and it was not uncommon for joiners to have had over a hundred planes.

The underside. The blade is showing at bottom centre
and the little nicker blade to its left. 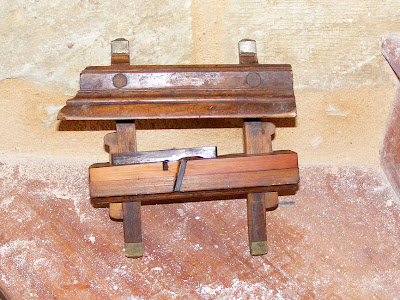 In the 20th century planes like these were made from cast iron rather than wood. Stanley seems to have been the leading brand. In Preuilly there are quite a few collections of woodworking tools, as there was a large furniture factory here, employing many menuisiers (joiners) and ébenistes (cabinetmakers) making high quality pieces that were sold all over the world. After having been the biggest employer in town, fashions and economies changed and the factory laid off virtually all its workers a few years ago. Now the cabinetmakers are pensioners and they and their tools live in retirement. Undoubtedly many of them will have rabots a feuillurer, as rabbet planes are known in French, sitting in workshops and attics.

A side view. You use it from right to left and the blade is
held in place by the wooden wedge top right. 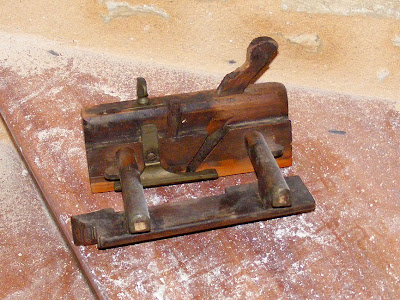 I will need to carefully clean Grandpa's plane. To do this I probably need to take it apart, then gently rub with a barely damp cloth, followed by waxing. It's important I don't get too carried away and damage the patina. It suffered slight damage in transit, so I also need to glue a sliver back on one corner.

Note the plane appears virtually identical to this wedge stemmed sash fillister plane I found for sale on the internet. Fillisters are a type of rabbet plane, very similar in design to a plough plane. I had hoped that Grandpa's plane would turn out to be what is called a guillaume in French. Since Guillaume is French for William it would be fun if that's what I could call William Mold's plane, but it seems that guillaumes were used to make complex curved mouldings, and Grandpa's plane has a straight blade.
Posted by Susan at 09:00

I'd say this is a beautiful piece of art. I love those old tools. I'm fortunate to have quite a few. They were handmade with such love!

WV is remparin. That sounds like some kind of medication.

And that's the plane truth.

Looks beautiful in your niche.

CHM: I love this sort of thing too. The skill involved in both using and making is clear.

Pearl: You are clearly incorrigible :-) It does look nice in the niche - one of Simon's excellent ideas.