Getting The Man In

I said on Thursday that I was once again surrendering on the painting front and getting the man in to paint.

This is not the cheapest of options, but it means that my temper has not been strained at what is for many people a difficult time of years for tempers. It also means that the job is finished, in a fraction of the time it would have taken me, and at much better quality.

After installing the hotte we decided that it loomed too much and needed to be integrated more with the rest of the kitchen. As we had already painted one of the walls of the dining room with a light grey tint I played around with photoshop to see what using the same colour would do to the kitchen wall. It certainly reduced appearence of being too imposing (we need to strike a balance here, imposing is good, over imposing is just ostentatious) so we decided to go with the grey. 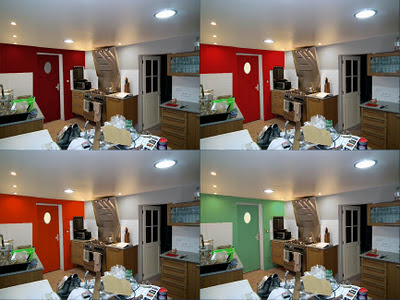 We had decided that we would try to match the colour of the dining room lambris to the lampshade we had bought. (Is that the wrong way round - chosing a lampshade and then having to match paint to it?). It was applying the red paint that bought on the sulk that has resulted in the job actually getting finished before Christmas. As we had red at one end of the room, it seemed natural to chose the same colour for the other end (the end wall of the kitchen).

We may have decided on red, but the boldness of the
undercoat caused us to wonder if that was the right choice. 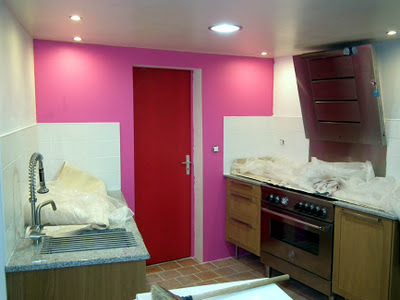 So - Bruno arrived on Wednesday morning, and has been amazing. He has undercoated, sanded back, final coated and made no mess. Even more impressive is the fact he has only used about 1 metre of masking tape, preferring to work precisely and use his brush control.

Finished - with dinner on the way. 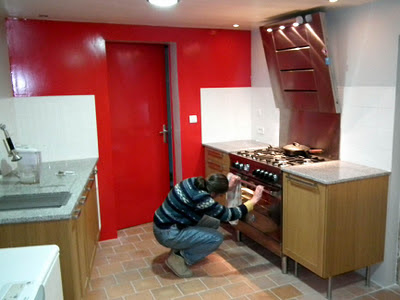 There is still work to do - the door and window frames need painting, and we have racks and shelves and under unit lighting to install. We also need the sink and taps installed.

For a before and after shot, click here. A new window will pop up with a picture - there is a slider to make things even more exciting.

ps Andres commented the other day that undercoat " should be tinted, but I don't know what tint for red." I think none of us should forget now...
Posted by Simon at 09:00

Nice! Your 'before' shot is pretty much how my kitchen looks right now! I can dream of better days! The red looks fabulous, too.

Brilliant !!
But I'm disappointed you didn't go for the pink look !!

Very nice! Funny, but I like the orange and the green versions.

So we both now have a red kitchen wall! :) I like yours as well as mine. Have a lovely Christmas Eve. Martine

S&S - Truely amazing after what we saw on our visit in 2010.
Sue and I wish you both a great Christmas and good health for 2012.

I knew it should be a pink undercoat under red.... but not that shade of pink!!
And I just love the XML flash before and after... you real lifted that door!
Tim

Looks great! Really like the green option as well.
Have a great Christmas Eve :-)

It will definitively be a cheerful kitchen.
Merry Christmas!

I rather liked the pink too. The green is not really the colour we thought might work. We were aiming for more of a sage or olive colour, not that icky arsenic colour. The orange we actually tried and had to remove because it wasn't right.

I didn't go for the green, the orange was something we tried (but the paint peeled off in a sheet), and I liked the pink a lot, but couldn't see it as a colour to live with.

We keep considering what colour to do our kitchen. taking off shelves we see it's been white, cream, deep yellow and dark grey. Red would be nice. Or orange. Then there's the matter of backsplash tiles or not....