A Traction for Jean Moulin is the name of a project to restore a pre-war Citroen Traction Avant.

The restoration work is being carried out by a group of 11-12 year olds at the College Jean Moulin in Montceau-les-Mines. Helping them with technical advice and donations of parts are Traction clubs, including the club we belong to, and enthusiasts from all over France. The Traction itself has been named Titine and was donated by our own Dr Traction, Jean-Louis. You can see a video of the kids' activities here and the president of the club that has been formed writes a blog here.

Montceau-les-Mines was once a coal town, but when the mine closed in the early 1990s, the descent of the town into poverty and deprivation was immediate. The project is to create a bridge between generations and to encourage citizenship and respect for history whilst building confidence and teamwork. 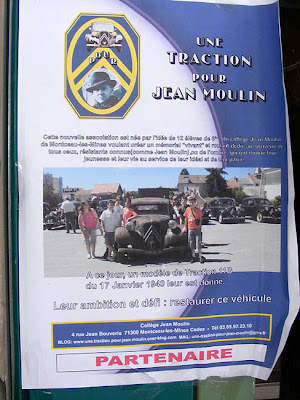 "This new club was born from the idea of 12 Year 7 students from Jean Moulin College in Montceau-les-Mines wanting to create a 'living', working memorial dedicated to the memory of all those, whether well-known Resistance members (like Jean Moulin), or in the shadows, who have given their youth and their life in the service of their ideals and their patriotism.

Their ambition and challenge: restore this vehicle."

Jean Moulin had already achieved prominence as the youngest ever préfet in France (CEO of a département) at the time of the Nazi occupation. He was well read, witty and artistic, and a significant player in the Resistance movement from the beginning. He was eventually betrayed, arrested, tortured and died in 1943. Jean Moulin is a household name in France and the image of him in his fedora and scarf is as iconic as that of Che Guevara. There is a museum dedicated to him on top of Montparnasse Station in Paris that we visited last time we were in the city. 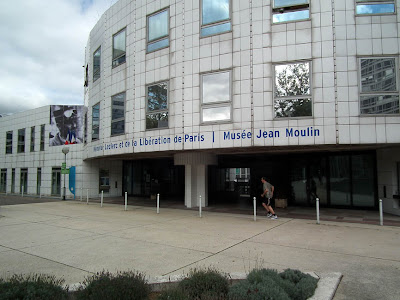 If you've got half an hour or so to spare while waiting for a train I recommend this museum. It's free and full of evocative newspaper clippings, photos and even some of Moulin's drawings.

Email ThisBlogThis!Share to TwitterShare to FacebookShare to Pinterest
Labels: Memorials, The Car and Driving

The French Resistance has always
fascinated me. There was a BBC
series we watched years ago
which I looked forward to each
week but which always had my
heart thumping as the suspense
was so excrutiating. Those who
participated deserved to be
honored.

speaking of traction avants; how is fair Célestine?

Sheila: It must have been a very frightening way of life indeed.

N&A: no news yet. We are still trying to locate a suitable new gearbox.

they're so cute. i love their bright little faces -- no pubescent surliness. they all look engaged and happy and well-occupied.

I wish I'd had the opportunity to do something like that when I was eleven. A life-changing experience, I think.

Jeannette: they seem like an engaging group, full of liveliness and promise. I especially like Alice, who never remembers her protective clothing, but somehow never gets dirty, even though she is right in the thick of it. The boys can't understand how she manages it.

PG: Indeed. 11 is a special age, frequently underestimated. The kids are clearly getting a lot out of the project.