I photographed this advertisement at Saint Pierre des Corps, the big interchange railway station for Tours where we collect most of our clients, and since then I've seen it on bus shelters and billboards all over - even in Preuilly. 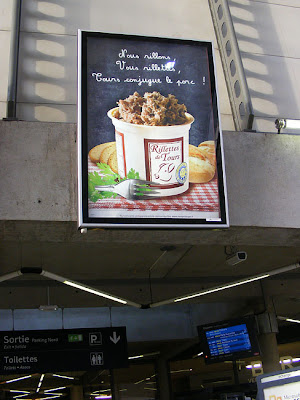 Tours has recently won protected geographical status for one of its local dishes, rillettes de Tours, a type of coarse paté made from shredded pork. The IGP certification means that the food product must be traditionally and (at least partially) processed within a designated geographical area. It looks like the local trade association is having a campaign to encourage people to buy local artisan made rillettes. There are 20 manufacturers of rillettes de Tours allowed to use the certification, so hopefully all of them benefit from this advertising.

The ad is fun for us Tourangelle French learners as it plays on conjugating a (non-existant) verb. Rille is apparently an old French word for a piece of pork, and rillons are bitesized chunks of slow-cooked pork. The joke, or perhaps play on words is a better term, is possible because rillettes and rillons look like plausible verb conjugations for vous (you) and nous (us). Conjugue is also used in the general sense of 'combine' (as for the ingredients in a recipe).

Proper French speakers will no doubt just groan at the silly puns, learners like me will get a little thrill out of thinking they understand the joke and non-French speakers, who only have to access the meaning via my explanation will just go 'well, maybe you had to be there...'

The best is from Hulin in 37120 Richelieu, purveyor to the stars!

Susan: the only play on the words is with "rillons" which is pronounced the same as "rions" i.e. let us laugh. So "nous rillons" sounds exactly as "nous rions!" We laugh...and so do I! I have seen better plays on the words, though!

"Vous rillettes" doesn't even sounds close to "vous riez", but that's a nice attempt with some sort of a conjugation.

Believe it or not, WV is tatin. I can't imagine either a rillons or a rilettes tarte tatin! LOL

Maybe I should have mentioned, for those interested, that nous rions [we laugh] is the first person plural of the present tense of the verb RIRE, that is to laugh.

Word verification of Days on the Claise is very imaginative. This time it is valsing, like valsing with words!

I think it's pretty cute and I haven't seen these posters and ads before. Thanks. I'm still not clear on the difference between rillettes de Tours and rillettes du Mans, but I know there's a rivalry between the two cities.

Rillets du Mans is so named because it takes 24hours to digest it :-)

Having eaten both in comparison testing... [I like rillettes]... I found the Tours version to be far less fatty.

HP: I'll try and remember if I see it around.
CHM: I think the joke, such as it is, is base more on how the words look rather than how they sound. It hadn't occurred to me that there might be a connection to rire.
Ken: Me neither.
Anon: Very good! LOL.
Tim: I may have to delete your comment. I don't like to think of my readers fullating over the rillettes. I'm sure it's a practice that should be discouraged.

The ACTUAL time is 7.49am and the WV is to "enbocull"... or how to store the rillettes once made.

I read on Wikipedia, confirming what Tim said above, that rillettes du Mans are much fattier than rillettes de Tours, which contains bigger pieces of lean meat. Since 2003 and my move to Touraine, I no longer buy the ones from Le Mans.