On a Christmas Theme

We were surprised and delighted; we had not suspected that Loches was so good. I hardly know what is best there: the strange and impressive little collegial church, with its romanesque atrium or narthex, its doorways covered with primitive sculpture of the richest kind, its treasure of a so-called pagan altar, embossed with fighting warriors, its three pyramidal domes, so unexpected, so sinister, which I have not met elsewhere, in church architecture.
Henry James, A Little Tour In France. 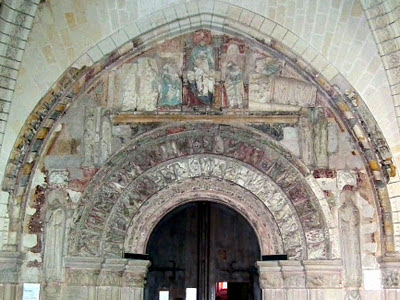 Henry James called it correctly: the narthex of St-Ours in Loches is indeed impressive. A narthex, or porch, is traditionally where people who were not communicants of a church could stand outside the church, but still under cover, to hear the sermon. There was usually also a font, so that people could be baptised symbolically on the journey into the church. The doorway into the church proper is surrounded by a fully carved 12th century nativity, with some interesting touches.

The Holy Family: Mary on the left, with the
baby on her knee, and Joseph on the right. 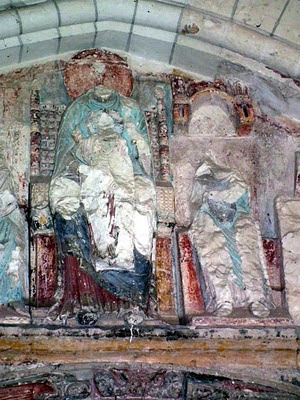 The other major players in the drama which is the door are the Magi, the term used for the priestly caste of the Zoroastrianism religion. Three (out of a possible 12* or so) are shown in adoration (to the left of the Holy Family)... 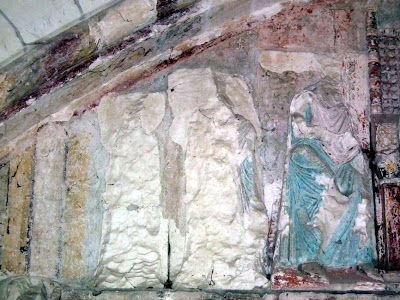 and also to the right, asleep (under the same blanket!) and being visited by an angel who is warning them not to visit King Herod and also of the coming massacre of the innocents. 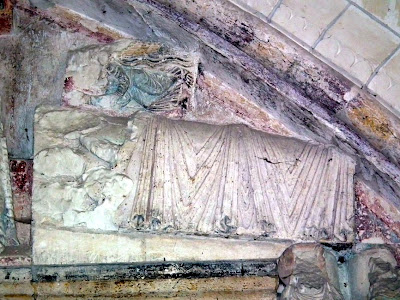 The angel is in blue, hovering above the nicely carved blanket which covers the recumbent Magi.

If you're ever in Loches, follow in the footsteps of Henry James (and us) and visit the porch of the church on the hill - don't forget also to call in to see the tomb of Agnes Sorel.

Email ThisBlogThis!Share to TwitterShare to FacebookShare to Pinterest
Labels: Churches, Loches and area, Towns and Villages near Preuilly