When I left my parents standing in a queue at Charles de Gaulle airport on the 10th of July 2011, I didn't expect that I would be seeing either of them any time soon.

Sometimes fate takes a hand in matters, and in this case it was not good news. My father's brother had become seriously ill, and on Saturday 5th November he died. Dad immediately said he wanted to attend the funeral (naturally) and so almost a week later he arrived in London, accompanied by my brother and his wife. Susan and I were working and so couldn't attend the funeral, but a couple of days later I caught the train from Tours to London so I could spend some quality time with my Dad.

We did lots of stuff, none of it world changing, but really pleasant and quite relaxing. On Thursday we visited the city of London, calling in to see the collection at the Soane Museum before walking from Lincoln Inn Fields to Aldwych - via Westminster Palace. Along the way we tried to visit the London Transport Museum (placemark B - too expensive, we didn't go in), The Da Vinci exhibition at the National Gallery (placemark D - sold out) and the Banqueting Hall (placemark E - closed for a banquet). I did, however, manage to show him Brydges Place (placemark C - London's narrowest street, not marked on google) and the Roman Bath (placemark F, a misnomer). After that, we caught a Routemaster bus back to Tower Hill and then on to our accommodation. 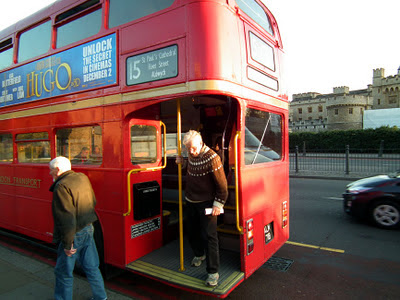 On Friday night Dad was leaving to return to Australia, but I hired a car and we filled in the day by visiting the Imperial War Museum at Duxford. A great Boys Day Out was had with hundreds of aircraft and lots of photo opportunities. The weather was really pleasant, amazing for November in East Anglia, and it was good to see some of the English countryside with my Dad, something we probably haven't done since I was 7.

Peace and Love and Understanding? 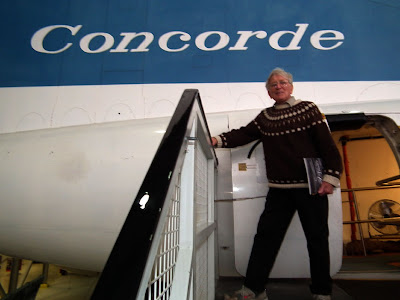 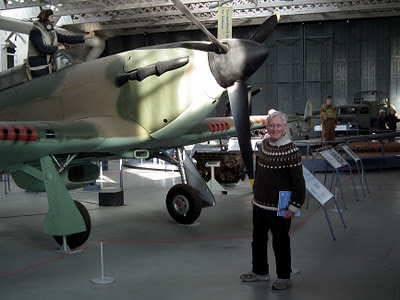 We arrived back at Heathrow in plenty of time to have a coffee and a chat, and then Dad was off on the plane (hadn't he had enough of them by now?). I hope we can have a repeat visit of that kind: short and full-on, blokes doing stuff.

It is to be recommended.

Nice to get quality time with a parent. Never really did with my Dad... didn't like to show his emotions too much [a hang over from Jap POW camp apparently - lost too many friends].
For all that, though, he was incredibly supportive... and when it came to business, full of concise advice and constructive criticism... and take it or leave it ideas.
I hope you get more blokes-stuff time with your old bloke... or should that be Hurricane?

I bet there was a slight tear in each blokes eye on departure. I understand Simon, the importance of that quality time.
I enjoy a glass of Guinness with my 90 year old bike riding Dad every Thursday night and hope I can do that for many more years, afterall, I am getting older.
Nice post Simon.

Glad you had such a great time with your dad. :-) Sharing time like that is worth its weight in gold.

Dad time is different to every otehr sort of time. It's something that I think most blokes would say they don't do enough.

Liselle - welcome in from the Lurkisphere

It was a sad occasion that brought your father your side of the world, but on the bright side you were able to enjoy his visit and spend some unexpected quality time with him. Hope he had a nice trip back home.

Father day to me said...

Being together with our father is like the only man we have in this world.

It's quality time like this enjoyed as an adult son or daughter with a parent that makes one cherish those moments. I am pretty sure he will remember these boys' outings :-)

What an uplifting post and lovely to read that you got so much pleasure out of the quality time you were able to have together.

Alas it is too late for me with either of my parents as they have 'moved on', but it is my greatest wish that my children will feel the same as you about spending time with me.