The first of August 1914! The sky was so blue on this evening in a beautiful summer; not the least cloud, no suspicion of a storm above the harvested fields...when, brutally, at the end of the afternoon, the bells of all the churches of Loches and district sounded out, slowly, heavily, with the sadness of a funeral bell...In the bustling streets there suddenly reigned an atmosphere of great sombreness. This time, it was war! After all the time we've waited! At last we are going to be able to retake Alsace and Lorraine!

The chaps from Verneuil and Tauxigny, Beaulieu and Saint-Hippolyte didn't all leave with enthusiasm for their meeting with History, with death, but they left all the same, docile and resigned, singing and joking, undoubtedly to hide their emotions, and repeating over and over, all the better to convince themselves, that they would be back before autumn, to drink the new wine. 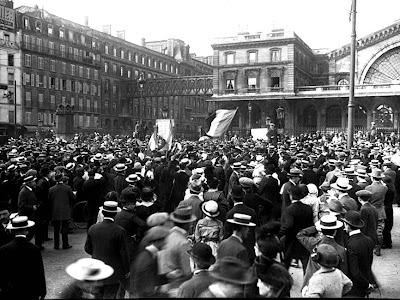 The first of August 1914! The sun set on France, on the district of Loches and on this time which, after the war years, appeared, in the memories of the survivors, so very Belle.

Very moving, Susan, thinking of the horrors that followed.

We had a minute silence today - November 11.
Leon

"We will remember them" ..... and the millions of others killed and injured in conflicts throughout the world.