When I was in London last week I took quite a few photos. These are three of my favorites, and all of them are photos of the River Thames.

The first gives a very small idea of what the Thames must have looked like 50 years ago. In those days large boats were still travelling up river to disgorge cargo from around the world, some of them travelling as far as the Pool of London, between Tower Bridge and London Bridge. In its full glory it looked like this, now almost no seagoing vessels venture this far upstream. 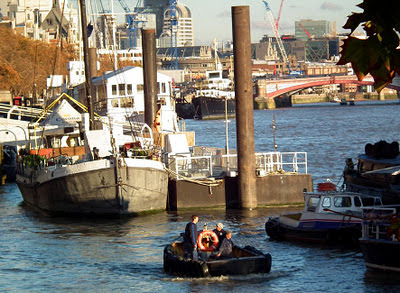 The second photo is from the balcony of the apartment my brother rented in Canary Wharf. As much as I do not like Canary Wharf and its associated shopping hell, it has to be said there are some good views to be had. 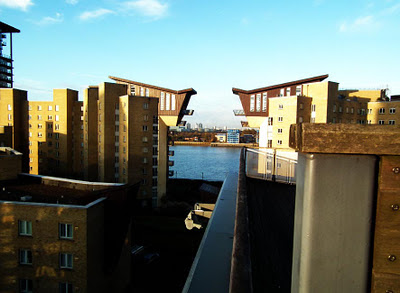 The third photo was taken at Leigh on Sea, late on Sunday afternoon. Leigh on Sea is famous for cockles, so Uncle Geoff and I decided to be true East Londoners and promenade along the waterfont eating shellfish from a bag. 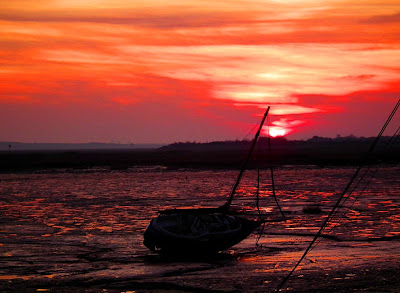 That sunset picture is beautiful.

Ditto Jean's comment. Have they
run aground? Or perhaps this a
common event on the Thames, and
they are just waiting for the tide
to turn.
My English mother used to tell of
going to the local fair as a child
and eating winkles.

Sheila: the Thames is very shallow at its mouth, with large mudbanks at low tide. This is where the cockles live

The 'Pool of London' is a term that predates the construction Tower Bridge and so includes a much larger stretch of water (and dock-side wharfage) than one might think today. The Luftwaffe set much of it alight in the 40s and so nowadays we do not see the extent of 'Imperial' mercantile facilities that stretched endlessly to the east. To see the import/export trade now, just go to Harwich deep-water container port!

I've never seen Millennium Wharf from that angle, only from the riverside or passing by on the bus! I know what you mean about Canary Wharf, but like it or not, that's our "High Street".

I wanted to thank you for this excellent read! I liked what little I've marked to see new things you write.