Earlier this year our Australian friend Liselle was leading a tour group in Corsica. After the tour was over she took the opportunity to stay with us for a week, and she brought with her some Corsican chestnut flour as a gift. In the old days chestnut flour was a staple food of the inhabitants of Corsica, and today it is one of the stars of Corsican gastronomy. 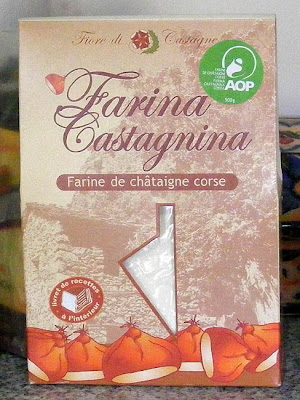 The area the Sweet Chestnut Castanea sativa is native to covers the Mediterranean basin, but it is Corsica that is historically most strongly identified with the production of chestnut flour. For hundreds of years, Sweet Chestnut growers have selected the sweetest varieties and perpetuated the cultural knowledge to create a great delicacy. Chestnut flour is naturally sweet and incredibly fine. This allows the creation of many dishes, ranging from the traditional pulenta (a Corsican chestnut version of the Italian cornmeal polenta) to the more modern and exotic, like my Chocolate Chestnut Soufflé Cake. It is rich in vitamin C, low in fat and suitable for gluten free diets. Ideally, it needs to be kept in the fridge, and you need to sift it into your mix as it has a tendency to cake into little lumps.

Chestnuts picked up in the carpark at Chenonceau. 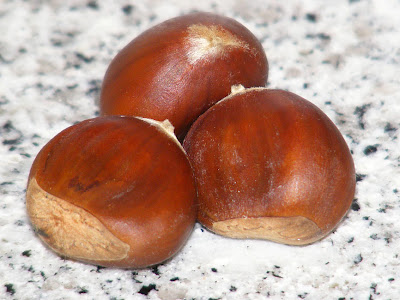 According to the blurb on the box Liselle brought us (I've translated):

The Chestnut has been inextricably linked for at least 5 centuries to the life of the inland villages of Corsica. Today, chestnut growing is an essential component of safeguarding the cultural heritage, mountain economy and the ecology of the area.

Harvested around mid-October and dried slowly, the chestnuts, belonging to several specific varieties, are shelled, then rigorously sorted and selected before being baked in wood-fired ovens and ground into flour. From their ancestral experience, the producers obtain a chestnut flour characterised by its sweetness, fineness and purity, with a smell and taste of dried chestnut and biscuits.

Chestnut flour is fairly easy to get in France, with most good supermarkets stocking it. I have also bought it at Halles et Champs in Perusson.

Chestnuts and chestnut flour were also a staple of the diet in les Cévennes in south central France. I'll have to try some.

I still really like the name of that shope, Halles et Champs, which is a play on the word alléchant — "tempting" (makes your mouth water).

The Corsican Chestnut beer is worth a try too! And thanks Ken, I'll look at "Halls & Fields" in a different light now... and have another word in my growing French vocab! The goodies in that shop are definately VERY tempting.
Tim [posing as Pauline]

Ken: I guess it becomes a staple wherever the land is too mountainous to grow wheat.

I agree, the name of the shop is very clever, and apt, as Tim says.