Some of the ingredients for Chocolate Chestnut Soufflé Cake. 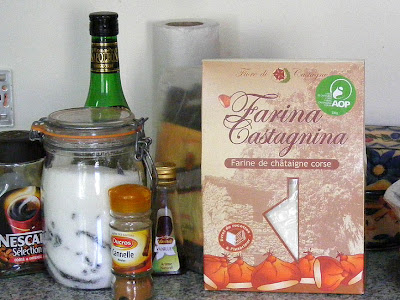 Chocolate Chestnut Soufflé Cake is a recipe I make when I have accumulated a lot of egg whites in the freezer. I make icecream and custard often, which just take yolks, so I am always searching for yummy ways not to waste the whites. This recipe is an adaptation of Sally Schneider's Chocolate Angel Food Cake, and since I have been living in France I have been making it with chestnut flour.

The cake in the oven, nearly done. 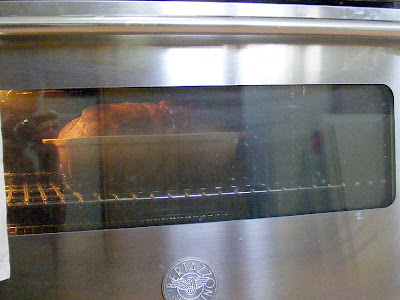 This post is especially for John, my brother-in-law and my friend Elizabeth, both coeliacs, and for Liselle, who brought us the chestnut flour from Corsica, and who we wish lived closer so she could visit more often.

Err...oops...this is one reason for making the muffin sized versions. 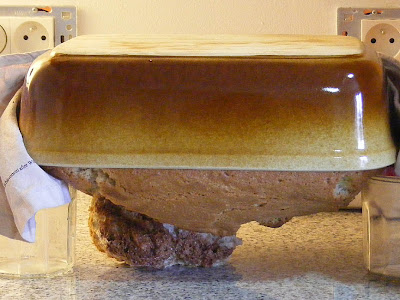 ...still, it's an opportunity to show you the highly
aerated interior of the cake. The cake keeps very well for several days. You can also make smaller versions by cooking it in muffin tins. The recipe divides easily to make a smaller quantity and halving the recipe makes 18 regular muffin sized cakes or 6 jumbo muffin sized. 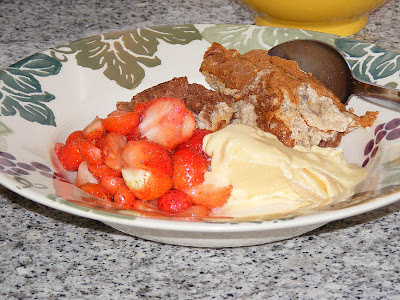 Serve it with homemade vanilla, strawberry or blueberry icecream (how else are you going to get the necessary egg whites?)

The recipe looks complicated and the 3 bowls make a bit of washing up, but it is actually surprisingly simple and a delicious treat for all.

It certainly sounds delicious and we will be trying as soon as we've been to buy more eggs.... Colin has just offered to make one for me so I'm posting this before he changes his mind! Thanks Susan!!

The cake looks delicious. Is chestnut flour easy to find around here?

Another good way to use extra egg whites is French financiers, made with poudre d'amandes.

Thanks again to Simon for his help with my Trojan Horse...

I'll try this if and when I have enough egg whites. It sounds and looks so yummy!

I make crème anglaise from time to time and I have unused egg whites. That might be the occasion!

That's an idea. Why not have this soufflé with crème anglaise?

Elizabeth:excellent!
Ken:yes, chestnut flour is fairly easy to get. Good idea about the financiers - better get my cup cake tins out of storage!
SP: too late we've scoffed the lot!
chm:another good idea - next time...

I'm 'borrowing' the financiers idea and definitely bookmarking this recipe. Delia Smith makes a 'squidgy cake' which works on the same kind of principle, I think.

LadyJ: yes, I've made Delia's squidgy chocolate cake in the past. It's more like a sponge than a soufflé I seem to remember. I'll have to make it again now that you've reminded me!