As part of my wildlife friendly management of the orchard I have laid down a number of sheets of corrugated iron and big planks of wood in quiet corners of the grass. These provide shelter (underneath) and basking places (on top) for small mammals and reptiles. Every couple of months I lift them to check who is 'at home'. There is a mad scramble for burrows and usually all I get is a glimpse of retreating furry bottoms. 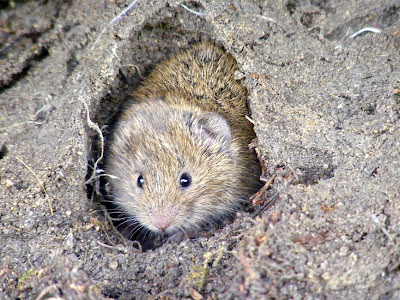 A few days ago I had better luck though. Under one of the sheets of iron was a little family of Short-tailed Voles Microtus agrestis (le campagnol agreste in French). They duly did the mad scramble thing, but within minutes bold little faces were peering out to see if I had gone. I hadn't, so I managed to get one very cute photo. 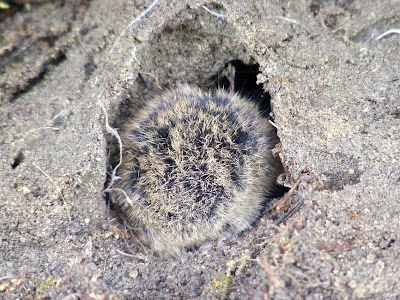 Short-tailed Voles are about 110mm long plus a tail of about 35mm. A fully grown one can weigh 50g, a young one only 20g. They are quite shaggy for a vole, with hairy ears. They like to live on the fringes of fields (indeed another English name for them is Field Vole) and can be found throughout France. 'Our' voles appear to be making a good living from our hazel nuts, but the species also like acorns, bulbs, grasses and roots. Active during the day as well as the night, they can run fast, but rarely climb. They live in social groups in shallow burrows and their numbers can increase dramatically over a 4 year cycle of boom and bust. Occasionally they can cause commercial damage to lucerne pasture or cereal crops, when numbers reach plague proportions.

A shot showing the short tail (on the left) and giving you
an idea of the burrow network. 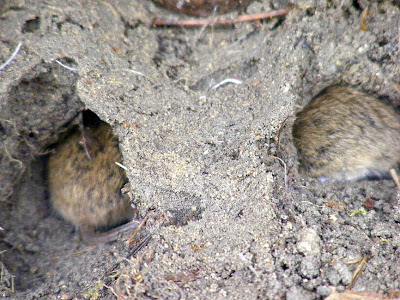 They are the main prey of Barn Owls and the voles' population affects the owls' breeding success. Owls are not their only predators either - weasels and stoats, foxes and cats, buzzards and kestrels, asp vipers and grass snakes are all keen to dine on vole, so it's just as well they breed rapidly.

They are so cute!

We've had a few of these cute critters.
Thankfully we were able to 'liberate' most from Shadow or Katinka. Then, having had some peace and quiet in the 'recovery bucket' to get over the shock, we gave them their freedom.

They are too cute. That reminds me, I have some corrugated iron to look under. I hope I find a cute surprise and not a snake nest!

LJ: You are more likely to find the snake nest in the compost heap :-)

That;s so thoughtful of you...lovely photographs too.