What Happens Around Preuilly in September?

Hunting: The main hunting season starts this month. Game in French is gibier and furred game such as rabbits, deer and boar are gibier à poils. Waterfowl is gibier d'eau, and the third category of game are the very controversial oiseaux de passage (migrating birds). The exact start and end dates for the hunting season varies from département to département, but here in Indre et Loire, the general opening date is 9am on 19 September. Conversely, the angling season ends on 19 September.

The rules are many and precise.
A Red Legged Partridge 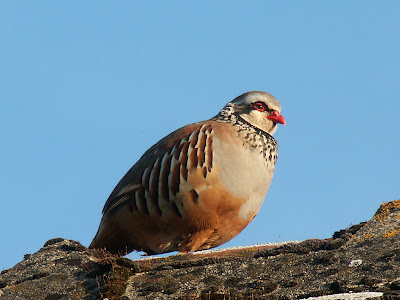 Grape harvest: The wine growers will start harvesting their grapes sometime this month, the exact date depending on the weather. The harvest is called le vendange. Also being harvested will be sunflowers and feed maize, so there will still be lots of slow wide vehicles on the roads.

Touring cyclists: Now that the weather is a bit cooler, the serious touring cyclists come out with their high-vis gear and enormous laden panniers.

Open House Days: Known as Open House weekend in the UK, in France they are the Journées du Patrimoine, on 18-19 September. This is your chance to see all sorts of places that are not usually open to the public. In Preuilly there will be guided walks of the town, the museum is open and Gérard Fleury, an expert in medieval sculpture, will be giving a lecture on the Abbaye.

Anniversaries: Célestine first came to live with us twelve months ago this month, and it was three years ago that we had the barn and staircase tower re-roofed.

How Célestine was when we first saw her 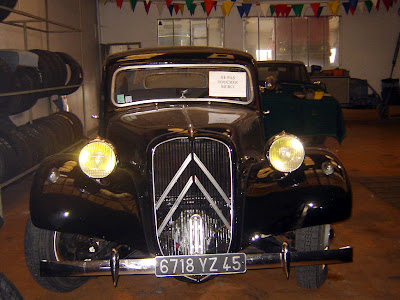 Cyclamen: carpets of these lovely flowers can be seen under the trees at many a château park.

Cyclamen in the grounds of Preuilly's Château 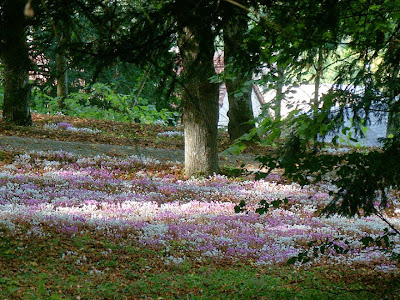 Susan,
Would you pass on our regards to Celestine. I'm sure she is so pleased to have been adopted by such a loving couple. So many Celestines have ended up orphans and sent to the crusher - such a cruel fate for any Traction Avant.
Leon and Sue

For me, seeing a field of cyclamen like that is remarkable. We only see them in the nurseries here (western US) in the Fall and they are rather expensive.

Susan, the maize also goes for oil from some of the farms around here - viz: our neighbour. The resultant waste then goes for feed and/or pelleting for heating fuel [mainly industrial] The tournesol waste is now going the latter way too!

Tim: very good to hear it's being used sensibly.

It's usually les vendanges. It's always plural when it means the time during which the grape harvest takes place. And it's la vendange, feminine, in other contexts.