A Matter of Timing

Last week Célestine travelled a long way, in all about 500km. I know that doesn't sound a lot by modern standards, but as some parts on the car need attention and lubrication every 500km we regard it as a fair distance.

Towards the end of the week she was doing something a bit "individual". When we were cruising she would shudder. This got increasingly worse, until I became convinced it was the clutch slipping. A call to M.Musseau and we were booked in to be looked at yesterday afternoon.

He took her for a drive (enjoying himself immensely, it has to be said) and said the clutch was fine, but it was a probleme de carburation. 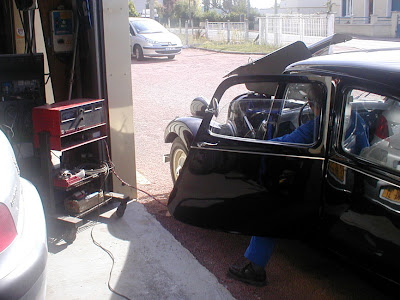 We returned to the garage, where he hooked her up to the machine to check the timing. It was about 15° out, so out came the screwdrivers. Thirty minutes later we were on our way. The timing still isn't perfect, but we are within 2°, something he is quite content with.

M. Musseau likes playing with Célestine, it gives him a chance to use his mechanic's skills and his brain, whereas with modern cars most of it is computer driven.

A man in his element. 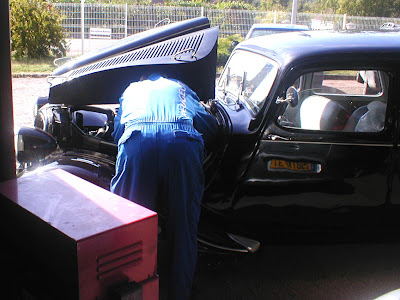 If you don't understand these things, you can read about it here. It will be less confusing than me explaining it!
Posted by Simon at 09:00

A little adjustment on your "Dizzy" does wonders for your performance. I'll let you explain that to your readers Simon!!!!
Leon

A fag paper at TDC I believe. At least, that used to work on an HT wagon...