What to Do with Green Tomatoes

It was very cool this morning, about 6° C. This means that if you have a vegetable garden, right about now you are probably thinking about what you can do with green tomatoes. This year there looks like being lots.

Really, the short answer is - put them on the compost heap.

The usual recommendations of Fried Green Tomatoes or Green Tomato Chutney have fairly limited use. Fried Green Tomatoes are rather an acquired taste, and how much chutney do people eat these days? We eat almost none. The only recipe I have found that makes anything the least useful out of green tomatoes is Green Tomato Ketchup, and even then I wouldn't bother making it every year.

It may look an uninspiring khaki colour,
but if you put enough spices in, it tastes OK... 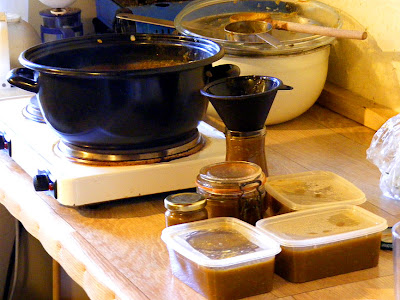 Once you've stripped your tomato plants, lay the tomatoes out in a box and wait a couple of weeks to see if any of them will ripen. Some of them will, and although they won't be fantastic in salads, they will cook up nicely in an end of season pasta sauce with the last of your peppers, zucchini and aubergine.

Green tomato ketchup is wonderful! And much better than HP Sauce with sossijis!

Ken made a version of this last year. We still have several jars in the cellar!