Pick me! Pick me!

Yesterday, on the sun drenched wall of a ruined house under the château terraces we encountered a fascinating scene of butterfly mating ritual. 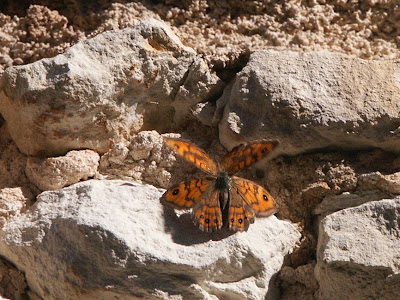 These are the aptly named Wall Brown butterflies Lasiommata megera. The one with the downswept wings in both photos is the female. She shimmied and fluttered to encourage her admirer. He positioned himself right in front of her and did press ups, then star jumps, then reached forward to gently caress her with one front foot. 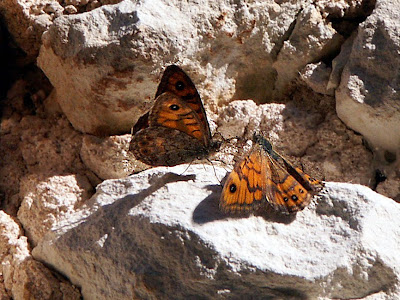 The male and female look very similar, but are not identical. The male has a prominent dark mark running through the middle of his upper wing. This is known as a sex mark, and the scales that form the dark patch emit scented aphrodisiac hormones. Sex marks are not uncommon in butterflies, but the Wall Brown's is probably the most striking. You can see it clearly here in a photo we took a couple of years ago.

In French, male Wall Browns are called les Satyres and the females are les Mégères (which, I am told by a local nature reserve warden, should be translated as something like 'Devils' and 'Witches', although it is literally 'Satyrs' and 'Shrews'.)

Wall Browns are widespread and abundant in France. They have an exceptionally long flight period, and can be seen in any month of the year in the southern half of the country. The caterpillars eat various sorts of grass. The adults like open sunny places, especially dry, rocky spots such as walls, banks and scree.

Thanks for the information, I didn't realise that the Wall had the sex mark. They've been a bit more common here this year, but still much less so then when I was young (a long time ago!).

Sweetpea: Thank you. It was absolutely fascinating to watch.

Tony: Yes, I always think of sex marks as associated with skippers, but in fact quite a few of the Nymphalidae have them too, like these Walls and the Silver Washed Fritillaries. Walls have suddenly appeared in numbers here - I assume it is their third generation for the year emerging en masse.

Once again, great photos. I really enjoyed these.

We don't seem to get the Wall here Susan... not enough walls in rural France? ;-)
Seriously, what are the differences in the Silver-washed?

Diogenes: Thank you. Simon took these.

Tim: Male Silver-washeds have 3-4 sex marks as strong stripes following forewing veins 1-3 or 4. Females don't have these stripes,just the underlying pattern of spots and blotches.

The Butterfly That Stamped.

Markski: yes, sometimes it seems a bit like that :-)