The Sorry Tale of the Potager With No Water

On 22 September the weather report predicted cooler damp conditions for the next week, so I stripped all our tomato plants and brought the fruit up to the house to sit in boxes and hopefully ripen. I can count on one hand the number of ripe full sized tomatoes the plants produced during the season, and the cherry tomatoes were not much better. A combination of a cold start to the summer and cold nights at the end, along with lack of rain seems to be the cause. Whilst our vegetable garden is not in a frost pocket, it is always a couple of degrees cooler than up at the house, and, according to our neighbours, the temperature difference between the lower part of the orchard, where the potager is, and the upper part, where the cherries, peaches and apples are, is quite marked. Now that the stream that runs along the front of these 'allotments' dries up in the summer, our neighbour has given up growing vegetables here, but has planted some young peach trees amongst his beloved walnuts on the upper slope.

Our overwintering onions and garlic did extremely well. Early summer vege, like lettuce, peas, broadbeans and mangetout did quite well, but the late summer crop such as tomatoes, zucchinis, green beans, sweet corn, aubergines and peppers was in some cases non-existant, and in others, no better than poor.

This is about three-quarters of this year's pathetic crop. 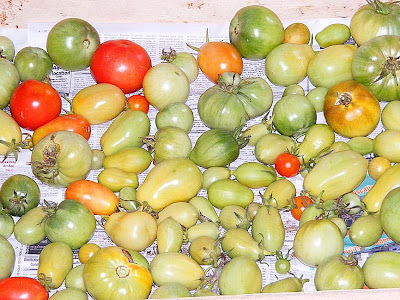 The garden is mulched heavily with straw and we have installed two water butts which would hold a total of 600 litres of water when full. Since their installation the most they have ever collected in one go is 150 litres. I calculate we need about 200 litres a week to keep the vegetables going. There is also the amount of physical effort required and the time to be considered. However, I have no plans to scale down the vegetable garden. I'm sure if I do that the weather system will revert to raining every couple of weeks throughout the summer and I would bemoan the missed opportunity. Mind you, if it rains regularly, I bet that diseases such as tomato blight are rife, so you can't guarantee a crop even in a more temperate season.

Our cunning plan for next year is to grow some late summer vege in pots up at the house, where we can water it easily. We were successful this way with tomatoes and peppers in 2009, and it does not involve any real extra work.

For now in the vegetable garden, we need to mow the paths and get ready to plant next year's onions and the garlic bulbils I've saved. They won't produce a crop until 2012, but we've got the space, and plenty of garlic from this year to last us until they mature. After the hazelnut crop is collected then we need to mow the orchard one last time for the year, before the orchids start to emerge in October-November. I disturbed a tiny Grass Snake Natrix natrix (Couleuvre à collier in French) the other day - slimmer than a pencil and not much longer. It was heading for the big pile of fruit tree prunings, which we have left in one corner to provide shelter for creatures such as this. Grass clippings get piled up nearby, and last year a large Western Whip Snake Hierophis viridiflavus (Couleuvre verte et jaune in French) seems to have hibernated and nested in the pile of straw in the shade of the paulownia. I'm guessing it will do so again, since some rather tasty looking young shrews have taken up residence in the pile, and a large family of Common Wall Lizards Podarcis muralis (Lézard des murailles in French), their favourite food, live in the adjacent logs.

It's such a shame to have all the hard work and little to show for it.

The potagers in Le Grand-Pressigny down by the river were doing well last time I saw them, but for obvious reasons. I suppose it's all down to "location, location".

If it's any consolation, we have only had success with tomatoes in Derbyshire since we had a greenhouse. The other crops on our miniscule veg patch vary hugely in success from year to year, one year being eaten by slugs or caterpillars, the next eaten by pigeons or rabbits. This year we tried growing fennel but just produced enormous poles of fennel stalk with no bulbs. It's completely maddening but that's the gamble in gardening, I suppose.

It must be quite different in your area as I have had the best season ever for my vegetable garden. I have to admit to having watered quite a bit, but mostly by hand as I did not want to push the water bill up too high. Although it is cooler I have left my tomatoes, beans, peppers and chillies in the garden and I am still picking daily. Diane

Susan,
We grow cherry tomatoes every year on our suburban block - several years back we couldn't understand why our little crop of ripe little morsels were disappearing before we could pick them. We thought maybe birds until we caught our Irish Wolfhound, Murphy gingerly nibbling the ripest of the crop.
Poor old Murphy departed a few years back so now we have to beat the birds to the crop this year.

We have had and are having a great tomato crop this year, but we did water quite a bit. Maybe not as much as in past years, however, because we had significant rainfall in both July and August. I guess the rain was spotty around the region, since you don't seem to have had much at all. I blogged about tomatoes again today.