Last Wednesday we had occasion to be in Loches with a visitor. Although we visit Loches from time to time, we have never been inside the Donjon or Logis Royale before.

The Donjon is spectacular and is visible from miles around. Built on a rocky outcrop overlooking the river Indre by Foulques Nerra (the impossibly butch sounding and previously mentioned "Black Falcon") the Donjon is claimed to be the earliest stone built castle in France (I assume the Romans don't count). 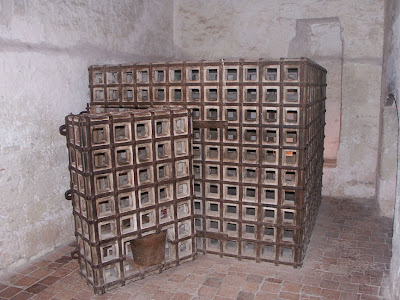 One of the highlights for us was the reproduction of the cage (complete with chamber pot) in which prisoners were kept. It was made by the same man who made our staircase last year. The original cage was built for Louis XI, and the legend is that he had Cardinal La Balue (another first division b@stard, who gained his promotions by denouncing his immediate superiors one by one) locked in the cage for 11 years. This is not the case - although the cage was used, the Cardinal was held in the comparative luxury of a stone cell. 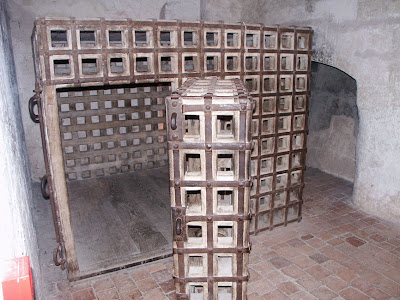 The view from the top of the Donjon is impressive, although not one the prisoners would have seen or appreciated. From here you can see the huge church and what remains of the monastery that was also built by Foulques Nerra in one of his periods of penance for a ghastly deed. (There are a number of monasteries built by Foulques, along with various churches. He had a lot of penance to do.) 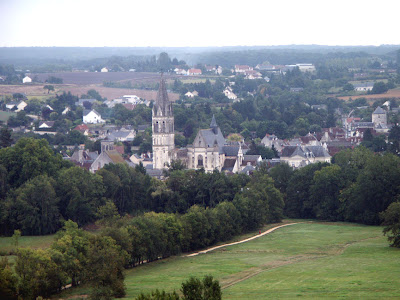 We are not the first people to visit Loches - Henry James was here in 1884 and wrote about it most entertainingly. The comments about trains still apply, even today. You can read his trip report here.

Note. I have changed the link for the Henry James trip report to one which is easier to read (and has the original illustrations)
Posted by Simon at 09:00

It took me a minute to realize that the cage was not a small scale model, but life-size. Fascinating and troubling. No doubt it was reserved for political challengers more than hardened criminals...

Those cages, called "fillettes", young girls I presume, are said to have been invented by La Balue himself.

How horrible. I find I can't cope with visiting dungeons these days - it unsettles me for days and gives me nightmares.

Mind you, I used to hide behind the sofa as a kid when Mr Pastry was on the TV !!

I liked reading the Henry James reference - in fact the whole book is a fascinating description of a whistle-stop trip around many of the main tourist spots that we all know even today.
Thanks for that.

The Romans did count, but they used those funny nvmbers.

Yes, thanks for the Henry James "trip report". I'm reading it and finding it very funny.

Mr Pastry? before my time (and I am sticking to that story!)

The Henry James stuff is full of great quotes, still relevant to the area today.