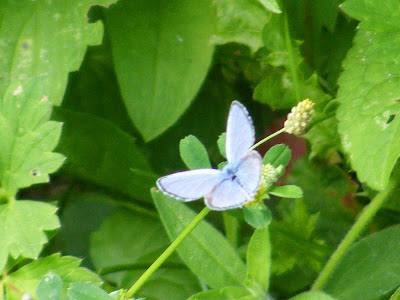 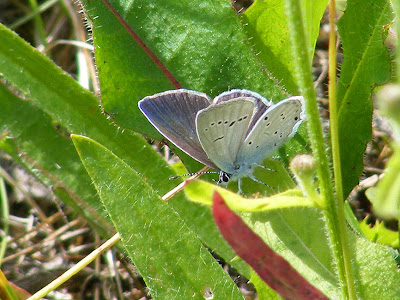 The Lycaenidae is a vast family of butterflies (some 5000 species throughout the world). They are small and the males are vividly coloured (although females are usually dull and brownish). The largest group in this family are known as the Blues, because almost all of them are some variation of this colour. They are notoriously difficult to tell apart, and several species will often fly together. Consequently, I spend a lot of time in the orchard peering intently at any blue butterfly that settles. The orchard, being a flower rich grassland, is a favoured habitat for blues, and of the 18 possible species for Indre et Loire, I have so far recorded a third of these on the site*. There are a couple I am unlikely to get, but have seen nearby**. The orchard soil is close to neutral (judging by the orchid species we get) and a few blues are only seen on really calcareous sites. 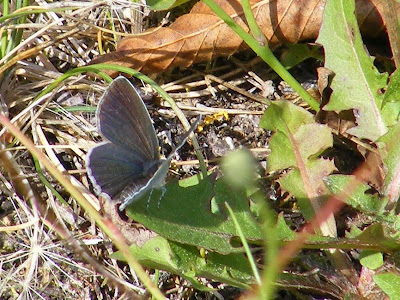 The dominant species are the Brown Argus Aricia agestis (le Collier-de-corail) - confusingly, a 'blue' that is brown in both sexes, and, living up to its name, the Common Blue Polyommatus icarus (l'Argus bleu). Every now and then, though, the small flitting blue butterfly turns out to be something else, and one species that is revealing itself more and more for me now that I have my eye in is the Provencal Short-tailed Blue Everes alcetas (l'Azuré de la faucille). 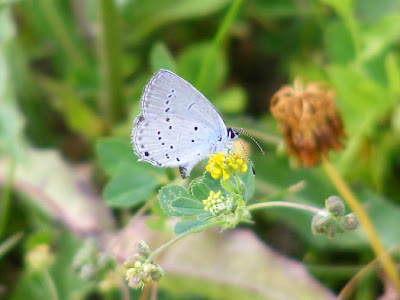 The PSTB is a little bit smaller than the Common Blue and tends to fly closer to the ground. The males are a light lavender blue and the females a forged steel colour that goes sooty with age. The undersides of both sexes are pale powdery blue with black spots. Crucially, there is a dot at the base of the tiny tail on the underside, but not on the upper. The adults are flying from April to September. They can be seen anywhere their caterpillar food plant, Black Medic Medicago lupulina (minette in French) is present.

For comparison, a male Common Blue. Note the brighter blue
upper side and the grey-beige underside with many more spots. 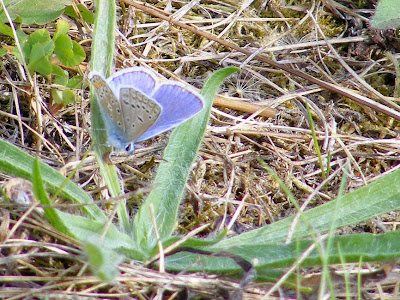 Another lookalike, the Long-tailed Blue Lampides boeticus (l'Azuré porte-queue). Note the much longer tail and spots on the upperside at the base. 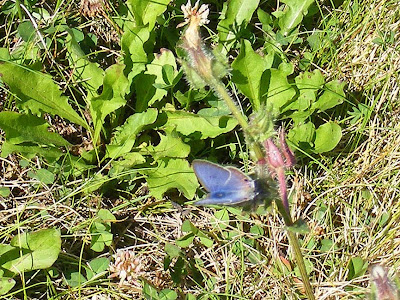 I am not sure what I have seen here but they are small and quite a bright blue. They never keep still long enough for me to take a photo. I enjoyed this post. Diane

I can only admire photos and dream. Texts are too much complicated for my english. Thanks for the link ! A bientôt

I don't think I've ever seen a blue butterfly in nature - though I'm guessing they exist in North America. Beautiful photos as always, especially the first.