Last time we spoke about the attic we had just dusted down the beams and were contemplating treating the wood.

This has now been done: on Friday the beams were Xylophened as a precautionary measure to treat against woodworm of various sorts and rot, then on Monday they were given some nourishment. This took the form of 1 parts linseed oil to two parts turpentine, painted on quite liberally. This has changed the colour of the wood, but the effect is already fading.

Mixing linseed oil and turpentine. The mixture has to
be heated to between 40° and 65° C. Any hotter than
that and the oils break down. Colder, and they won't mix. 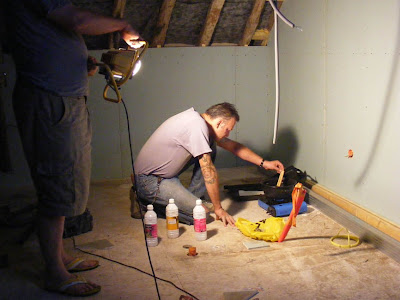 Painting the beams with the resulting mixture.
You can see how it changed the colour 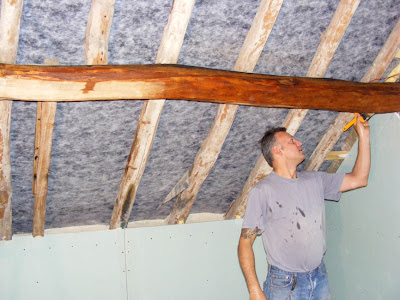 ...especially on the oak pieces. They have
already faded to an oaky grey colour 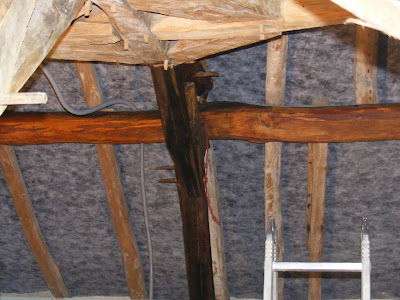 Insulation was the next task, so we fitted 100mm (4 inches) of glass wool between the chevrons (rafters) vertically. This was followed with another 100mm laid horizontally. The results should be equivalent to about 250mm of insulation, with the added bonus of no gaps where sheets of glass wool butt up against each other. 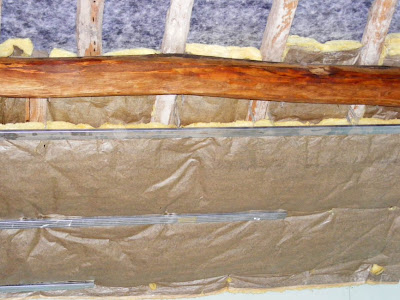 Probably the trickiest part of the operation so far has been doing the frame and plasterboard for the ceiling. The angle is 41°, but the ridge isn't level: the roof is 15cm (6 inches) higher at one end than the other. This means some 4 dimensional geometry, something acheived with much pencil chewing and scribbling on offcuts. Plus, of course, hydrofuge plasterboard is exceptionally heavy stuff: 26kg (57lb) per sheet, and we will have to lift some sheets over three metres, but still at the 41° angle.

Those of you who know Michael Green's "The Art of
Coarse Acting" may recognise this as a variation of
the human cleat. 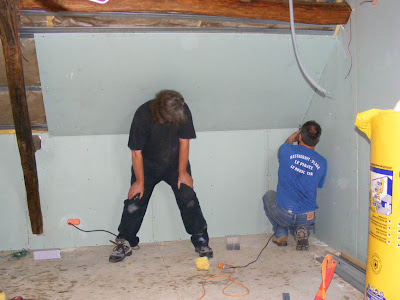 Today we start work on the upper reaches of the ceiling, something I am really looking forwards to.

This all looks very good. With changes to the upper reaches you must feel that things are really moving forward.

Having said that, it seems to be taking for ever, as well!

I can't see the siccatif!
And why apologise? It goes with being a humane cleat....

The recognition worde is flogge.... which seems appropriate!