The elevated limestone promentory in Loches has been occupied since ancient times because of its superb strategic position. The Royal Apartments (Logis Royal) occupy the northern part of the great spur of rock. Loches is and was the most important town in the southern Touraine, so in medieval times the court came here frequently.

The central part of the Logis is a defensive tower built in the 14th century by Charles V as part of the fortifications associated with the Hundred Years War. Later kings enlarged the building in the Renaissance style, turning it from a fort to a hunting lodge. Sadly, during the Wars of Religion and the Revolution the Logis served more as a prison. By the time of the Empire, it was reduced to being the government offices for the sous-préfecture. In 1948 the functionaries moved out and the building was opened to the public as an historic monument. 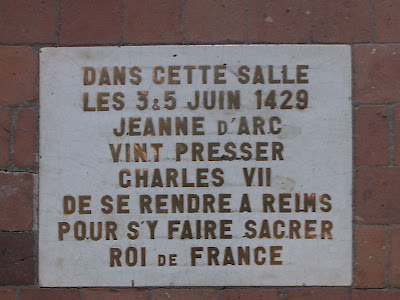 And this certainly is one of the most historic places in France, with its strong connection to Joan of Arc. As the plaque above says, 'In this room on the 3rd and 5th of June 1429 Joan of Arc came to press Charles VII to go to Reims and be crowned King of France'.

The rooms of the Logis are themed to present various characters from history. Charles VII is first, then Jeanne d'Arc, followed by Agnès Sorel. All these characters have a genuine association with this place and the display about the lovely Agnès is particularly good. Today, la dame de beauté, as she became known, is probably a more fashionable subject for the romantically inclined than Joan.

The sepia view out of one of the windows, looking down on the rooftops of Loches. 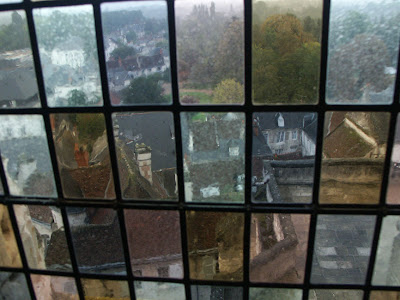 Agnès was the daughter of a comfortably off family from Picardy. As a young woman she joined the household of the Duchess of Lorraine, the Queen's sister. At some time around 1443 she met the King, and the rest, as they say, is history. Charles VII was so smitten that he took the unusually assertive step of publically acknowledging Agnès as his mistress. At this time, marriages were political and economic unions, and although Charles and his wife Marie of Anjou got on well enough to produce 14 children, they spent very little time together. It was considered entirely appropriate for people to seek not just sexual satisfaction elsewhere, but also true love and companionship. It was clear that Agnès was Charles' soul-mate, and she became very influential.

Tragically, only 7 years after they met, and after producing 3 daughters, Agnès, heavily pregnant with a fourth child, died suddenly and mysteriously (the infant lingered for some months before also succumbing). Immediately, poison and murder were suspected. Part of the display includes a video showing the research undertaken in the early 21st century when her tomb was moved and her bones exhumed. It seems very likely she was poisoned, and although the scientists do not offer an opinion as to the identity of the murderer, the obvious candidate is Charles and Marie's son, the future Louis XI.

These charming pooches guard the entrance to the Logis. 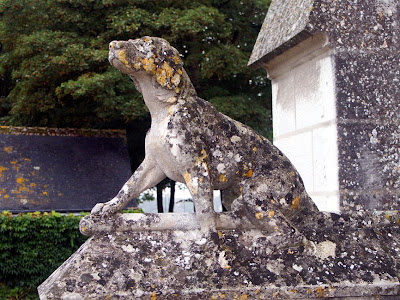 A copy of the most famous portrait of Agnès hangs in the room, depicting her as the Queen of Heaven, bare breasted, richly robed and gazing demurely downwards at the holy infant on her knee. In fact, the portrait seems to have been painted after her death, but scholars nonetheless agree that it is Agnès. The bare breast on the one hand signifies that Mary, as the mother of God, nourishes her people, and on the other, that Agnès herself was a good mother. Even the most aristocratic mothers breastfed at this time if they possibly could, because it was believed that babies absorbed much of their moral character along with the breastmilk, therefore it was important that the source of the milk was someone the parents could trust.

If you are interested in some of the key players in medieval France, or just love true romance, the Logis Royale should definitely be on your list of places to visit.

Email ThisBlogThis!Share to TwitterShare to FacebookShare to Pinterest
Labels: Loches and area, Packet of Three, Towns and Villages near Preuilly

Of course, la Dame de Beauté is a play on the word "beauté". No doubt she was beautiful, Fouquet's painting of her as the Virgin Mary is proof enough. But she was the Dame de Beauté, Lady of Beauté, because Charles VII gave his mistress the chateau de Beauté, a small village [Beauté-sur-Marne] near Paris. Here is a link in French:
http://fr.wikipedia.org/wiki/Beaut%C3%A9-sur-Marne

CHM: Aha! Thanks for this snippet, which I didn't realise. I see Richelieu demolished the chateau de Beauté. She does seem to have been one of those women who struck everyone who met her with her beauty - several contemporaries write about it.

Susan, I 'revisted' the Logis this year, after a first visit in 2007. The exhibition on Agnes Sorel was much more detailed and documented in 2007, as it was just after the results of the tests on her body tissues had just been published. There were even some glass cases containing pieces of her hair and bones. I guess everything is well under lock and key now, to protect it for posterity.

I'm guessing the window panes are all from different eras in that picture?

Love the dog with all the lichens.

Martine: We didn't get to see the 2009 exhibition, but it sounds fascinating

Diogenes: I suspect that most of it is now modern glass, but in the past the colour variations would be down to things like slightly different amounts (and types) of sand and potash, and different firing temperatures.

I adore those window panes, and how the view is injected with such presence because of them. Thank you for sharing!