Our friends Tim and Pauline, who live in the next river valley, rang to say they had a flock of European Bee-Eaters Merops apiaster (le Guepier d'Europe in French) feeding over the lucerne just down the road from their place. There is a nesting colony of these colourful little summer migrants on the sandy banks of the Creuse River not very far from Preuilly, and there are always smaller flocks around in the area, but you have to be in the right place at the right time to see them.

Here's one we prepared earlier - taken by my father a couple
of years ago near Yzeures-sur-Creuse. 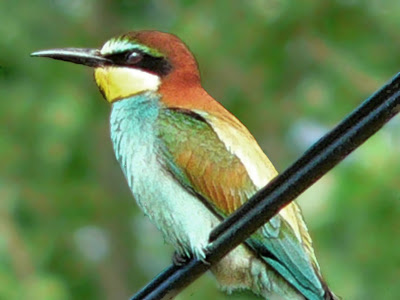 Tim managed to get some photos of them which he has posted on his blog, but when I visited a few days later they were nowhere to be seen. I think I was there an hour or two early, as they seem to go out foraging and return to the roost at T&P's dairyfarmer neighbour's at about 7.30pm. The farmer says they have been using his place as a stopover on their migration for several years, so hopefully I will see them when they return from Africa in March.

I think a Swallowtail butterfly Papilio machaon (Le Machaon) like this one below might be a bit unwieldy for a Bee-eater, but all sorts of insects love the lucerne. The field is traversed by some power lines too, which the birds love to perch on once they've made a kill. It's no wonder they've chosen this site to roost at and take another opportunity to fatten up before the migration. 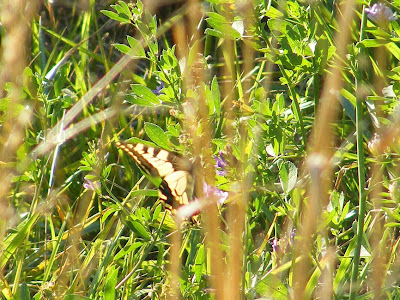 The lane up to the farm house is buzzing with wildlife in this warm September weather we've been having lately, so it wasn't an entirely wasted visit. I'm still green that I didn't get to see the Bee-eaters though. 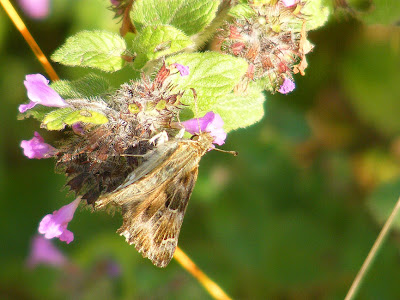 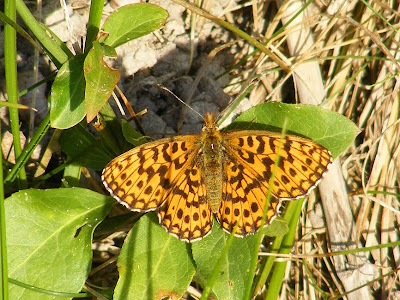 Beautiful birds. How far North do they go in spring?

The Bee-Eater looks almost as though he's been water-colored - colors I would expect in more tropical climates. And the Fritillary butterfly is beautiful. I always enjoy you nature pictures.

Nadege: apparently some make it as far as Finland and Sweden.

Diogenes: yes, they are very tropical looking. I'm glad you like the nature pics.

Nadege... about four years back a pair bred successfully near Durham in Northern England... not a normal event, this made the national papers and early morning news!