Pincertailed dragonflies are so called because of the very obvious pincer on the end of the male's abdomen. This species, the Small Pincertail Onychogomphus forcipatus is by far the most common and widespread in Europe. It's French name is le Gomphe à pinces.

Males can often be seen posing on stones by the waterside, raising their tails to make sure their 'gear' is noticed. The species varies a bit in colouration, with eyes that can be blue or green and with yellow markings that can range from dull to bright. Their favoured habitat is sunny streams with gravelly or rocky edges, but I have seen them patrolling the streets of Preuilly on a number of occasions.

A male Small Pincertail, photographed on a mill stream in the Aigronne Valley. 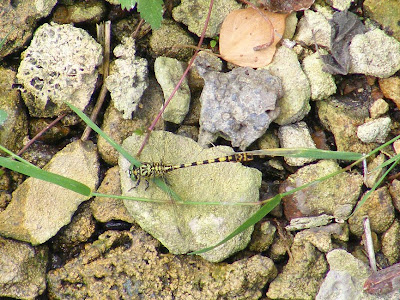 Although still common in France, this species is classed as vulnerable on the international Red List of endangered species. The main threats are 'improvements' to watercourses which control banks and flow, commercial usages such as gravel extraction and pollution.

A newly emerged female can be seen here, photographed on the Creuse river.

Must confess that I read a certain amount of wry commentary into this: "Males . . . posing on stones by the waterside, raising their tails to make sure their 'gear' is noticed. . . . I have seen them patrolling the streets of Preuilly on a number of occasions."

Beautiful pictures, and the silvery wings of the female are lovely gossamer.

Emm: It was unintentional at the time, but now that you point it out, one of our neighbours does come to mind...