What to do with our front door has always taxed us. Two years ago I managed to just about stop it leaking (as long as the rain came from the right direction) but we have always known that there is no way we could make it properly weatherproof. It's warped, which only adds distance to the gap between the door and its frame. Last winter the door was about as effective as a lightweight curtain at keeping out the cold.

This led to to creative thinking, the result of which was a decision to insert a sas d'entrée.

Making the decision was comparatively easy, putting it into practice was a whole new matter. The floor of the entry halls turns out not to have been level (quelle surprise!) which means that any door wouldn't open properly (something we had already noticed with the existing door). The fall over the five metre length of the hall was almost seven centimetres. This was fixed with careful application of cement.

The blue stuff is primer. This ensures
the new cement sticks to the old. 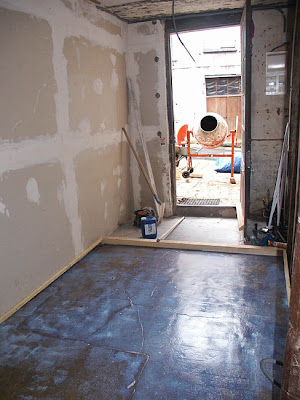 The entry hall had previously been lined with placo (plasterboard), but it was poorly erected, had never been painted and was quite badly damaged. When we were clearing out the old placo we discovered a row of old posts. We decided to make a feature of them, as you can see on the right of the photo below.

Stéphane lays the cement. There will be a
step up as you enter the inner door 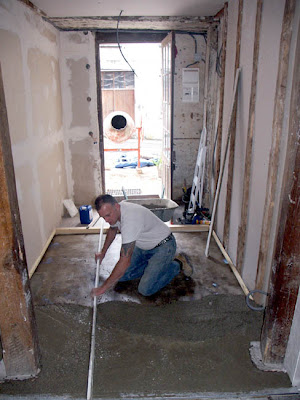 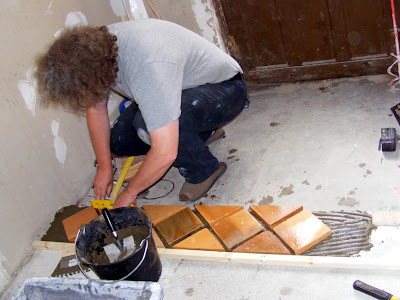 Of course, once the tiles were laid work had to stop on this part of the house for a couple of days until the glue (it's a sort of cement, really) set. This gave us a chance to catch up on some other works: as usual we have at least three things all happening at once.

We did a similar thing at our house. The front door was inside a small stone porch, protected from the elements but warped and not at all airtight. So we had the front porch glassed in, and now we can keep cold-sensitive plants in there in the winter. We were able to save the original front door, which we liked, because the sliding glass doors are double-glazed and fairly airtight. You seem to have found a good solution too.

Thanks Ken - we were wondering where we might grow our cucumber seedlings....