So, what have we got in the way of wildlife in the orchard?

Our potager / verger is run organically. It's mowed at times that respect wildflower seed development and insect life cycles. Weeds are only removed in the potager if the vegetables are in real danger of disappearing, otherwise they are allowed to act as green manure and soil stabilisation. To stop thistles getting out of hand they are chopped off occasionally.

The ethereal female Blue Featherleg, which drifts amongst
the long grass like a piece of straw being lifted by the wind. 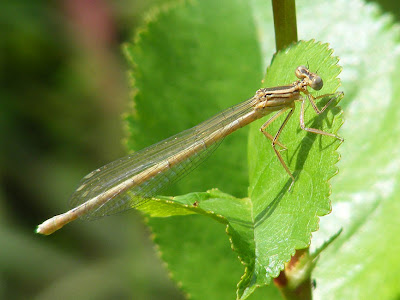 This management system has proved its worth already with the appearance of 5 orchid species, but I am also very pleased that we have a high population of damselflies enjoying the long grass and several species of rare butterfly breeding. 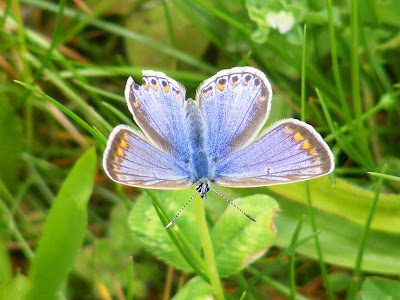 Orange-spotted Emerald Dragonfly (which naturally disappeared,
presumed eaten, a couple of hours before I did a wildlife and
orchid walk with clients, so they didn't get to see it after
I told them about it). 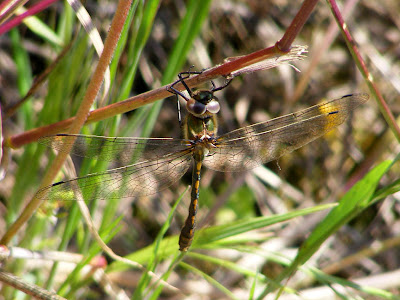 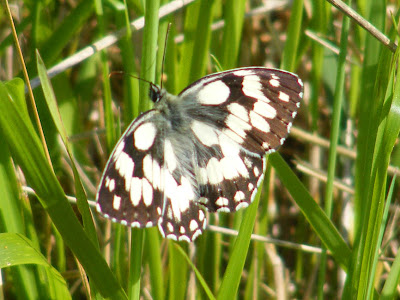 And that's without trying to sort out those tricky blues and darters seriously.

There is also a large population of European Wall Lizards, a large Western Whip Snake, along with many birds and dozens of species of bees, flies, beetles, bugs, moths and wasps.

Dad Update: I spoke to my father yesterday, for the first time in almost two weeks. We're not sure when he will be home, but probably next week if things continue the way they are.
Simon
Posted by Susan at 09:00

Beautiful pictures with masses of info. One day I may learn! Diane

The pictures you posted are pretty incredible! Thank you for this post.

Don't think I have ever seen a blue butterfly.

You must be glad that your dad is getting better - I am pretty sure that he is waiting to be in his own surroundings at home.

Diane: I am sure you will get to grips with French wildlife - I did. Remember - there is a lot less of it to get to know than in South Africa or Australia.

Diogenes: There is a whole family of small blue butterflies, and there are species all over the world. They are notoriously difficult to tell apart.