Yesterday, as we returned home from a lovely day out visiting the château at Azay-le-Rideau with Uncle Geoff and Auntie Pat, we stopped off at le Louroux. As we crossed the road from the carpark to the fortified monastry a group of horse riders came ambling down the main street. The lead rider, on a big mooching Appaloosa, had a friend riding up front with her. 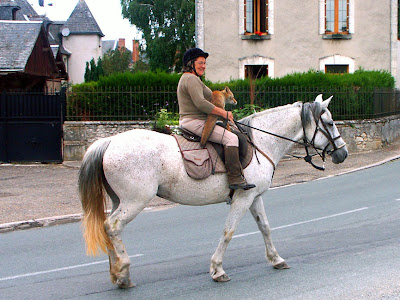 Apparently the fox enjoys going riding and it's all a lot of fun.

This wasn't the only horsey encounter we had at le Louroux either. Once we got into the monastry we met the Compagnie de l'Amarante, a local travelling theatre group, who were preparing to put on a show called De l'Eau Pour les Chevaux ('Water for the Horses'). One of the women introduced me to their horse, a 4 year old grey Percheron called Saline. She was out by the dovecoat grazing on the lush grass there. I was told that she pulls the small trailer they had, but the bigger traditional wooden caravan was too heavy for her.

PS Today is Simon's birthday. He's the big five oh. We are having a party this evening.
Posted by Susan at 09:00

Happy 50th to Simon. I might not be around for the second 50th but I'll try my best.

We came back last night from our Picardy/Normandy trip and are heading to St-Aignan this afternoon. See you soon.

HAPPY BIRTHDAY,SIMON.
Hope you have a great evening.

Happy Birthday, have a good time! We will try to catch up with you in August during our next trip out. Justin and Debs

Simon,
Only 50!!!! Enjoy the next decade and the others after that.
Enjoy life (I'm sure you do) and keep a smile on your face.
Leon

Half a century! How time flies. Best wishes. Stay away from Rouen...

Happy birthday, young 'un! I hope your life after 50 will be even better than the first 50 years.

50 is the new 40, Simon. Happy birthday, and break out the Perrier-Jouet!

Any pictures of Azay-le-Rideau?

I'm Welsh so I will say,
PENBLWYDD HAPUS I CHI SIMON
Gaynor

"it takes a long time to grow young" P.Picasso

Happy Birthday my "old" friend! I will call you!

Happy Birthday, and many more!