A couple of days ago I was in the kitchen making something out of cherries (that's a daily task at the moment) and I kept hearing something banging in the graineterie. I ignored it, thinking it was the wind. 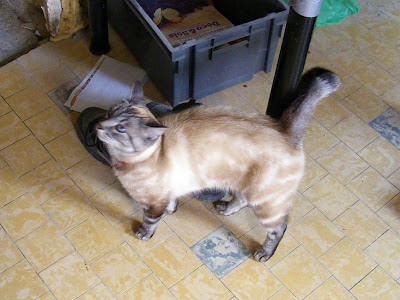 After a few minutes though, Pepsi appeared. Officially, Pepsi lodges with Stéphane and Valérie, who live over the back of us, but he is on friendly terms with all the neighbours and visits everyone daily. Valérie warned me that it wouldn't take him long to invite himself inside the house for a nose around. 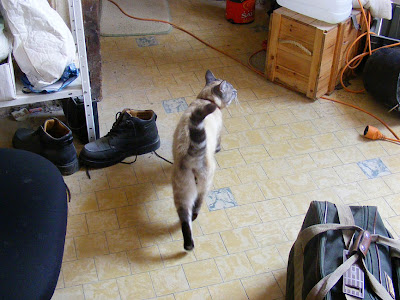 His visit was the day after I had cooked whole fresh sardines in the garden for lunch and he had benefitted from a lunch of tasty cooked sardine guts before mooching home. Valérie says it's no wonder he's never hungry.

...and departs via the vide sanitaire. 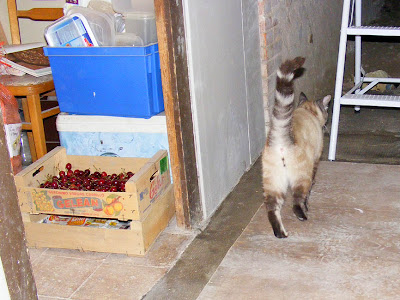 Pepsi must be like Bertie. He invites himself in all over the hamlet, and rubs up against the neighbors' legs until they give in and either feed or pet him. Nice kitty.

He is an unsusual color combination - quite an attractive cat. I have tried cooking fish for our cat (salmon) and she will not touch it, preferring canned food.

Pepsi looks vey much like the twin of our "Meitei" whom we know to be half Siamese -- a mix I highly recommend since this is my third cat of this ilk... Meitei is very much loved by some of the other families in our Hamlet and I can see that Valérie & Stéphane are extremely lucky "cat carers" indeed!