The hardware on the graineterie steps isn't the only hand forged metal we have in the house.

This month we have been working in the attic of the house, in preparation to installing a bathroom. We had previously contemplated having a door on the stairs to stop all the heat escaping during winter, but in the end we decided to amenage the attic. This has meant installing a new floor (and supporting frame) because although the basic structure was sound, there was a springiness in the joists and a flexing of the floorboards which was disconcerting (to say the least), and would have caused problems when we came to tile the floor.

While we were up there we realised that there was a surplus of nails sticking out of the hand hewn beams, just waiting to tear lumps off scalps the first time anyone stood up quickly. These we removed carefully, because they are really quite attractive, in a brutish way. 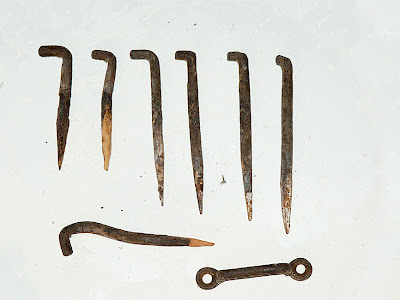 The nails have been made by cutting lengths of iron rod, hammering and grinding a point onto them, before bending the top over to create a head. 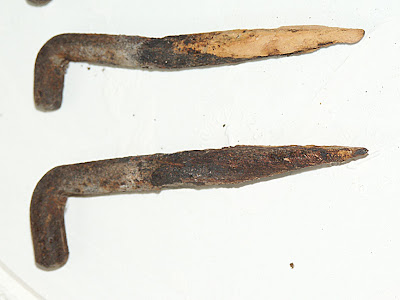 I may have to frame them and hang it somewhere - it seems a shame not to preserve them in some way.

IKEA do some very nice, plain, deep frames.... if you want to brave Tours at holiday time.

I agree with you. Those nails are amazing and should be framed.