Yesterday we visited La Corroirie with Ken and CHM (read Ken's account of a visit a few years ago here). A medieval fortified monastic farm complex near Loches, owned by Jeff de Mareuil, the place is fascinating. Originally part of the Chartreuse of Liget, or Charterhouse of Liget, it was where the lay brothers attached to the monastry set about taming the wilderness. The marshy valley it is set in was considered an uninhabitable malarial swamp in those days. For the religious community it was ideal. It would be their equivalent of going out into the desert, away from the wickedness and temptations of secular life. Life would consist of hard work and prayer. The lay brothers drained the land and planted hemp.

Henry II (Henry Plantagenet, who had established the monastry) encouraged the cultivation of hemp, because its fibres were used to make sails for his navy. Much of the hemp fibre went to making rope for use within the monastry and also for textiles to make clothes. Once the clothes were worn out they were recycled to make high quality paper for the illuminators and copyists making religious books.

The four à chanvre (hemp oven) at La Corroirie, a rare survival.
Apparently it also served as a prison. 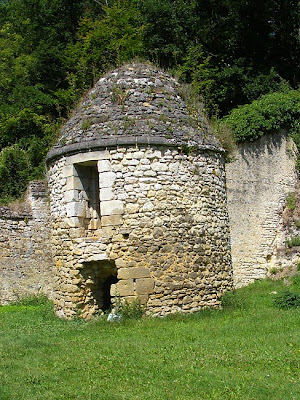 Hemp is a bast fibre, like linen, so is not easy to work with. Once harvested in the autumn it must be soaked in running water for several days and 'retted', so that unwanted soft plant material falls away and you are left with the long tough fibres that can be spun. In medieval times the hemp would have been left in the nearby stream, but this practice releases pollutants and is now illegal. The next stage is for the stalks to be dried in the hemp oven (four à chanvre), then milled (or 'beetled') to break up and soften the fibres somewhat, then spun into thread to be woven into cloth or twisted into cord.

Hey!Thanks for the info.I liked your site.Well,do U have any idea how to hemp oil is prepared?

Kenneth: I assume it is much the same as other seed oils - crushed / milled / cold-pressed.

Interesting post - you don't see too much hemp history site-seeing. Thanks for helping inform people about hemp!

HP: You're welcome. I'm a big fan of natural fibres, and the history of these fortified monastries is fascinating. France grows a significant amount of hemp, as I am sure you know. I can buy hemp straw quite easily in my local garden centre and it is widely used here as an insulating material by those concerned with sustainable lifestyles.

The building was also used as a kind of prison for naughty monks. The guide and I agreed that they probably wouldn't be allowed to stupify themselves with the stored contents! liking the blog.

Colin: yes, in fact for most of the year it functioned as a prison. Only in the autumn was it required to dry the hemp. Its significance is as a rare surviving hemp oven though. Hemp grown for fibre is useless as a narcotic, so even if they had smoked it, they wouldn't have achieved anything. Glad you are liking the blog.