There are a couple of possible reasons for this: they could be assuming everybody will party hard and need the public holiday day to recover, it could be that the crowds gathered on the 13th of July before storming the Bastille, or more prosaically, it could be that if the celebration in Preuilly was held on the 14th no-one much would attend because they would all go to one in the big city.

Anyway - at 9.30 tonight we will all set off from the Mairie to walk a circuitous route to the chateau, then across the river (twice) before ending up at the plan d'eau for fireworks, beer, and line dancing to "Just a Gigolo". All this will be accompanied by a band (maybe samba, maybe calypso - or maybe something else entirely) and flaming torches held by the pompiers (firemen). Maybe this year I will buy a Chinese lantern (for charity), but probably not.

A defunt and derelict grain chute in the granary.
This was one of a number of grain chutes, but we had
to demolish it to make room for a doorway to seal
the house off from howling winter winds. 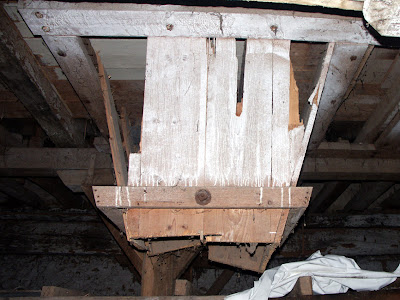 Accompanying us this year will be Elizabeth and Vic, my sister and brother-in-law. They arrive this afternoon and are in town until Sunday, and are the reason for the concentrated burst of activity in the guest bedroom (now very nearly finished). When they arrived they will probably have to make their own bed, which may include actually making the bed (if you see what I mean). 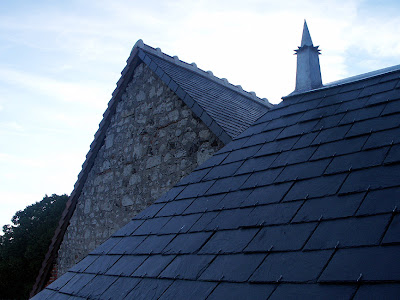 The roofers have gone one further, and have actually finished: they departed at about 3.00pm yesterday, taking their Merlo (which had been parked in the courtyard all weekend) with them. The roof looks good, and we even have a new épi (finial) over the staircase.

The Merlo departs, with about four inches clearance. 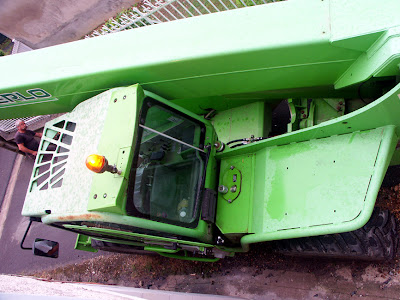 Congratulation on finishing so many projects. Enjoy the dancing and the fireworks, and the visit from family members.

Your new roof looks great. Quite a difference.

The roofers did a really good job.
Happy Bastill day!

So many reasons to celebrate! the roof looks gorgeous. And a guest room to boot! Enjoy.

As a serial renovator I know too well the difficulty in sustaining such a concerted effort over a long period of time - Bravo! It's lovely to see each milestone bring you one step closer. Beware the "what now...?" syndrome that often leads to selling and another project (this is where the 'serial' part comes in :-) )