Once we had laid the tiles for the door and we were sure they weren't going to move, the next step was to build a frame and insert the door. 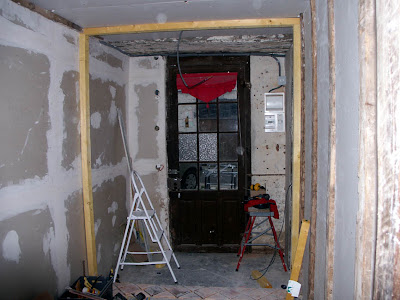 This is a big porte fenetre we bought a while ago at BricoDepot. In fact, it's the big secret thing we bought at Bricodepot that required the hire of a truck (and which Martine asked about a few days later). The door went in easily enough, but required quite a bit of adjusting so it closes properly. This took time and a bit of thinking, but so far so good. 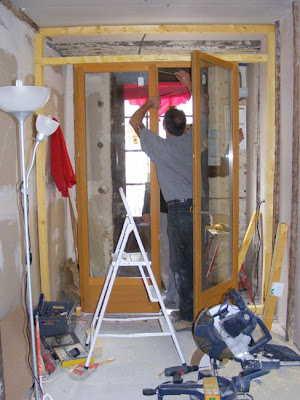 Next move was to finish insulating. We added 50mm of insulation to the already insulated walls, and did other stuff as well, including putting in the powerpoints and light switches. 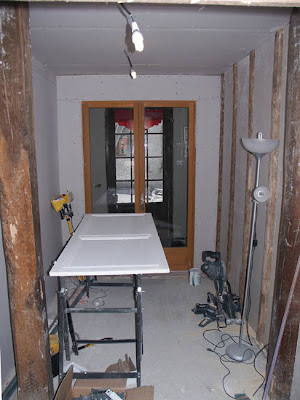 Now we have an entry hall, although it still needs the joints in the plasterboard doing and painting and tiling. At the moment it's a room with temporary lights where I can paint doors at midnight. Next week we have guests, so I will have to move the door, then we will use the sas d'entrée as a dining hall for a while.

Once the guests have departed this will allow us to move stuff out of the kitchen so we can start work there.

S&S,
I can see a re-visit coming on in a couple of years to compare the renos..
L&S

Your entry hall is looking good and I really like the exposed wood that you have kept.

At last we get to see the 'secret' item.;) What a difference compared to last year. I hardly recognize your hallway! Great job!
Martine