We have posted photos of the outside of Azay le Rideau Chateau before: we visited in winter and didn't manage to get inside because the staff were on strike. Last week we visited again, and as you can see from the photos posted a couple of days ago, this time it was a proper visit. 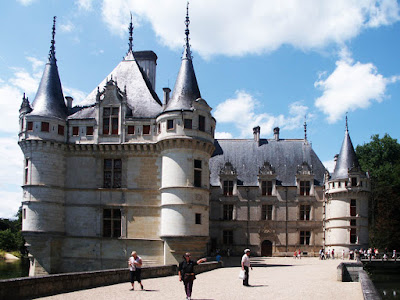 Situated in the heart of Touraine, in the Loire Valley, Azay-le-Rideau was built during the reign of François I by a rich financier wishing to establish his brand-new title of nobility. A small gem of the first stirrings of the French Renaissance, decorated with carved stone lacework, the château was embellished over the centuries by succeeding generations, with an entrance inspired by that of Vaux-le-Vicomte and an English-style landscaped garden. Yet it never lost its harmony. Still today, Azay “bathes in the Indre River like a princely creature” (Honoré de Balzac). 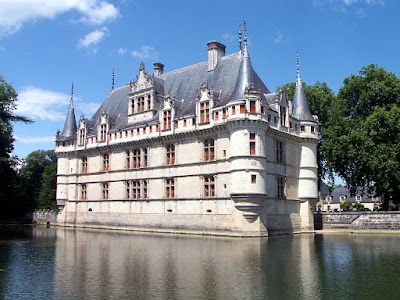 Which descibes it rather well, really. Form the outside it looks like the owner picked up the "Bumper Book of Chateau Cliches" (or maybe "Chateaux pour les Nuls"), couldn't decide what to have so went for the lot.

There is no doubting though - it is very pretty, and is well worth at least half a day of anyone's time. Being so close to Villandry they would make perfect partners if you only had one day to spend in the Loire Valley and wanted to see a pair of "proper" chateaux. Lucky Pat and Geoff even managed to travel to Azay le Rideau in Célestine, which made the day even more stylish.

You will notice I haven't abbreviated the name to just "Azay". This is to distinguish it from Azay-le-Ferron, which is about 10km from us in Preuilly sur Claise (and many other Azays as well). We have been told that Azay is Old French for "Assay" (although online all the dictionaries seem to say old French is "assai"), and thus indicates that mining or the assaying of metals took place in the area.

If one wants a really full 1-day trip, we would recommend adding he gardens of the château of la Chatonnière, which lies between Azay and Villandry, The two famous big châteaux are then the bread while the private gardens of one of the cutest country houses I have ever seen acts as the salami in a touristic 'sandwich'.

It's somewhere we keep meaning to go to, but there is also the Defresne museum in the same area as well. So far both have been unvisited, but we may have to combine them one day

I always wondered what "Azay" meant. Thanks for that.

And I did not know there was an Azay-le-Ferron, also beautiful.

On our last trip we saw Chenonceaux, Chambord and Cheverny. But I think my favorite is Vaux-le-Vicomte.

Azay-sur-Indre is really pretty, we have driven through a couple of times. It isn't that far from Azay sur Cher, either. All the Azays are quite close, which makes me think it's a local word

Simon... the Dufresne museum takes a good five houres to do! We only had three and therefore took shortcuts and deliberately missed rooms. And then there are the exhibits outside! Oh, yes! The Citroën tractor is there as well!!

I agree with Henri Proust the La Chat is worth a visit... the rose walk/belvedere that allows you to look at the 'leaf' is very fine.
Stop doing that bathroom and go!

One site says that Azay evolved either from a Latin family name, Atius; or from a "preceltique" name Azé meaning "abundant waters."

All the Azays around here (Rideau, Indre, Cher) seem to be close to rivers. Does Azay-le-Ferron have a big water feature?

No water except for a very little stream at Azay le Ferron. They can't even find enough water to fill up the fountains