Friday was Simon's fiftieth birthday, so we had a party in the orchard with about 25 people attending.

Build Your Own Pavlova
To our surprise, everyone had helpings of Chilli Prawns and Curry Goat, and most people had a hamburger with sliced pickled beetroot, fried onion, lettuce and cucumber in a bun. The sausages, which I had bought in case we had French guests who didn't like strong food, were hardly touched. The build your own pavlova, with meringues from one of Preuilly's boulangeries / pâtisseries was a great hit too, as was the cheddar. I think the novelty of the very un-French food appealed to everyone.

Much of the conversation during the evening revolved around food, and so we learned that:

Laurent, beetroot wrangling. Behind him, from front to back, left to right, Nicole C, Anne, Marie-Dominique, John, Jill, Nicole G. 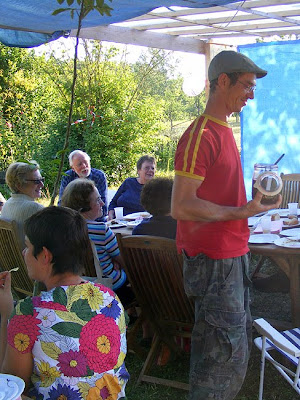 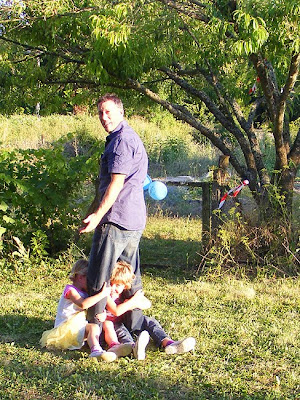 Jean-Pierre adding the final touches to his masterpiece. In the background (left to right), Sylvie, Pierre-Yves, Valérie and Stéphane. 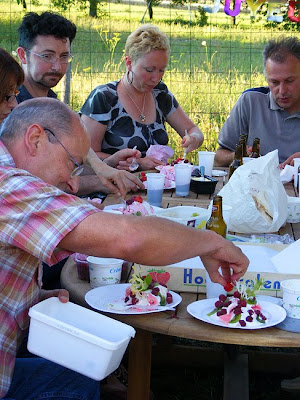 Jean-Pierre gives a botany and entomology lesson to Isabella (out of picture to left), explaining how some insects bite into the 'throat' of a honeysuckle flower to get at the nectar, thus bypassing the pollen on the anthers at the 'mouth' so that the flower does not get pollinated and so does not set seed. In the background (left to right), Simon, Sylvie, Pierre-Yves. 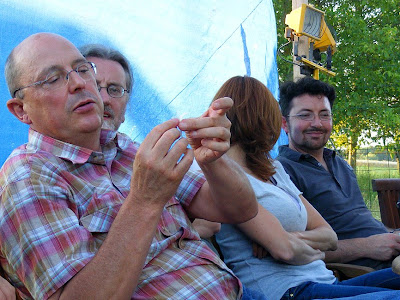 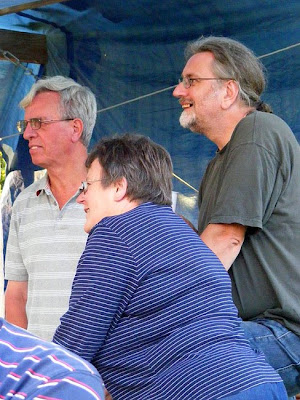 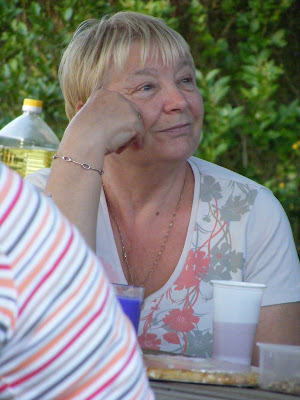 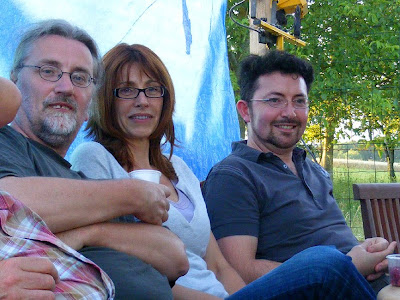 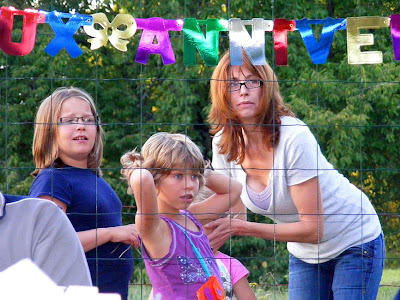 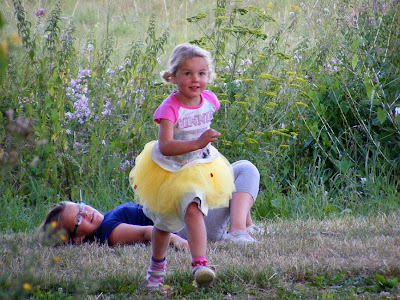 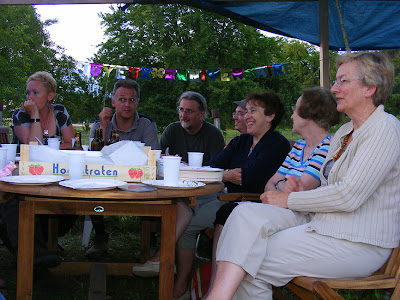 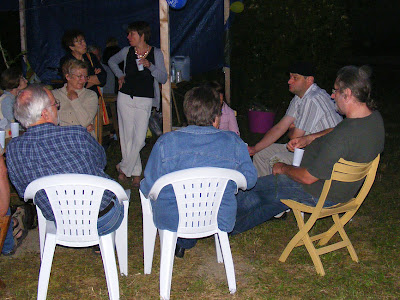 The best thing was that Simon really enjoyed himself and relaxed and had fun with some wonderful friends. We are very lucky.

Thanks are due to Pat, who did all the washing up and tidying away as well as manning the barbie; Geoff, who helped set up and take down; Alex & Nicole, who lent us the barbecue; Tim and Pauline, who lent us a coolbox; Huub and Ingrid, who lent us some chairs; John, who came down the next morning to jump start our car because the battery went flat after being used to power the sound system for 6 hours.

Also everyone who gave Simon wine, cheese, saucisson, beer, books and gift vouchers and their excellent company at the party.

Happy Birthday Simon. It looks like a good time was had by all ! the pav making looks like a lot of fun.
The new "structure" was put to good use, can't wait to see it all decked out in vines, I am sure it will look wonderful.

You had good weather and it looks like you had a good party. Sorry we missed it.

About canard à l'orange, are you sure somebody didn't confuse bigarreaux (cherries) and bigarades (bitter oranges from the south of France)?

Canard à la bigarade (or à l'orange if you can't get bigarades) is a specialty, for example of the Tour d'Argent restaurant in Paris. And the Larousse Gastronomique doesn't mention Italy at all when it describes caneton nantais à la bigarade ou à l'orange.

Maybe bigarades are not common in Italy so in that country they cook with sweet rather than bitter oranges. And I've never seen canard aux cerises in a French restaurant -- only in my own kitchen.

The menu looks very tempting. I probably would have gone for the chilli prawns and goat as well, with a side of potato salad.

Belated Happy Birthday, Simon! What a wonderful party this seems to have been!

It is very nice to see pictures of your friends. Glad the party was a hit.

Ken: bigarade is a new word for me, but now you have introduced it, I realise that this is the word Jean-Mi (who is the chef at l'Image) was using.