What to Look Out for Around Preuilly in August

Muck spreading: Farmers here house their cattle in cold weather and consequently have a considerable quantity of straw mixed with dung for spreading on their fields. It is often done in really hot weather and the pong pervades everything.

Fruit in Season: Plums come in this month. Charantais melons drop in price to well under €2 each at the market or direct from the grower. The main melon growing area is around Châtellerault-Richelieu-Loudun. Make sure you buy French melons which state their origin - the best are from the Val de Serigny and the best variety is Belle Indienne. Just follow roadside signs to find a producer with a shed full of ripe melons. For those of you who have never had a charantais melon, they are like canteloupe or rockmelon, but even better, especially straight from the producer. 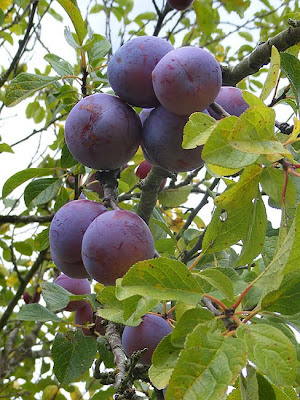 Vegetables in Season: everyone has too many zucchini (courgettes). Usually tomatoes, especially grosses tomates come down to under €2/kg at the market, but this year is a poor one for tomatoes, so maybe they won't be so cheap. Stuffed tomatoes is a very popular and easy late summer dish here. Ken posted an excellent recipe for stuffed tomatoes last year.

Camping cars, on their own or in convoy, lots of them on the road.

Vacationers on bicycles: a bit wobbly, pale skinned, not very fit (except if they're Dutch).

Sick or injured haybales are captured by local farmers
and taken to farmyard sanctuaries until they recover their strength. 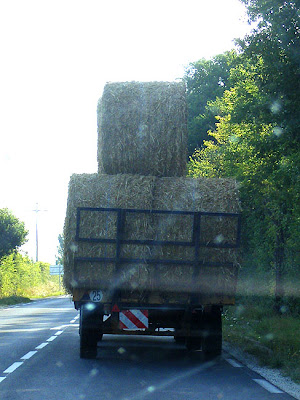 Supermarkets: stay open until 8pm to service the holiday trade.

Birds: Young Martins and Swallows begin gathering, in bigger and bigger flocks, on wires in the mornings and evenings, preparing for migration. The swifts have already left. There seems to be a buzzard on every second fence post.

Juvenile House Martins, chattering excitedly, get together
in the evenings to discuss the coming migration. 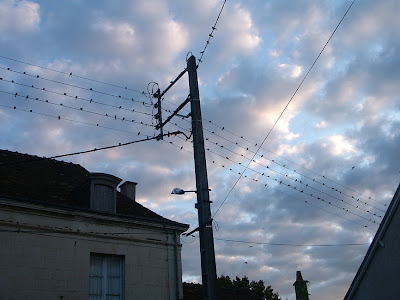 Crops: Sunflowers (not as spectacular as July, as they are beginning to turn); maize; some millet.

Tomates for €2/kg - that is less than half of what we pay for them here in the US markets. Even then, you have to make sure they are not "hothouse grown," which are tasteless.

There are five staves on those cables... see what tune they've come up with Simon!
Very nice summing up of the season Susan... especially the Giant Haybale migration.... I was behind one yesterday as I headed to Descartes... and we were passed by an identical load going in the opposite direction... and people go on about food miles for humans!

Susan, I'm wondering what weeds you have in your garden and whether we have the same weed families here. We have some doozies!