I discovered this slightly unusual recipe last year, when I was wanting use up early windfall pears and the bumper plum harvest was in full swing. This is my adaptation of a pudding in the Italian cooking bible, The Silver Spoon. 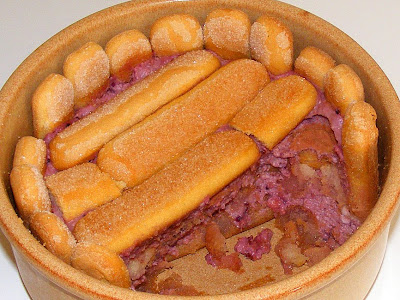 Method:
Being a charlotte, you are supposed to turn the dish out before serving, but because it was only the two of us I didn't. I just scooped out our servings and left the rest in the dish - so much easier to store that way. It is quite firm though, so I am sure it would turn out beautifully. The original recipe calls for 300ml cream, whipped, but I wanted a lower fat version this year, and used faisselle. Last year's version, which did use whipped cream, was a lot sloppier.

I didn't realise plums and pears would make such good companions, thinking the plums would completely overpower the pears, but this is not the case at all. You can clearly taste both.

You can re-use the wine drained from the plums, by adding some sugar and doing another batch of plums, in red wine syrup.

*Faisselle is a type of fresh cheese, like cottage cheese, but smoother, and usually eaten with a fruit purée. My laitière (door to door milk vendor) sells both cows' milk and goats' milk faisselle. It comes in 250g or 500g tubs with a slotted insert, so you can take the cheese out and drain the whey off.
Posted by Susan at 09:00

I have always shied away from making a charlotte - it's the sort of dinner party dessert that is likely to collapse miserably in front of the guests, knowing my luck!!
This looks delicious. I often combine plums with apples in a crumble (an idiot-proof pudding) and the flavours remain distinct.

This looks really delicious. I have more plums than I can possibly use but no pears. Will have to see what I can use instead.Diane

Diane: Do try it with pears even if you have to buy them. The flavour combo is really delicious.