Not something you need fear, but one of the most enigmatic of our dragonfly species.

August is peak flight time for the Western Spectre Boyeria irene (or l'Aeschne paisible, 'the peaceful hawker', in French). Unlike many dragonflies, which are brightly coloured, even twinkling metallic and iridescent, the Western Spectre wears full camouflage. It is dull brown and greeny-gray and is one of those species moving northwards in response to changes in the climate. It is supposedly uncommon in the Touraine, although common in Berry and Poitou. I think it is likely that in the last few years, in its move north, the Touraine du Sud has been well and truly colonised by this cryptic species.

Almost invisible, a female rests in an oak tree. 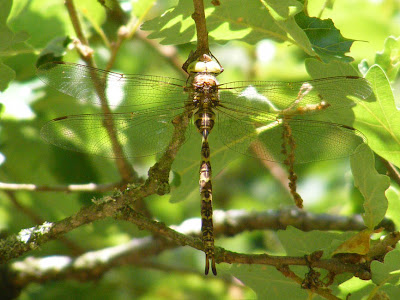 They like shaded flowing unpolluted water with wooded banks and a natural bed or well vegetated lake edges. I am told that if they are in danger they will feign death, but I've never seen them do this. They hunt mostly in the evening or early morning (although I have seen them hunting mid-afternoon a number of times), and will sometimes venture indoors in their quest for prey. My observation is that the females like to hunt under the eaves of buildings, and whiz around in rather a frenzy, so I am not surprised that they sometimes find themselves inside by accident. I've also seen them hunting around the edges of woodland clearings, a long way from any water. Males are more often seen patrolling a shady stretch of water, and can be distinguished from the females by their dark wing tips. They are not guarding a territory so much as on the look out females resting in some hideaway. 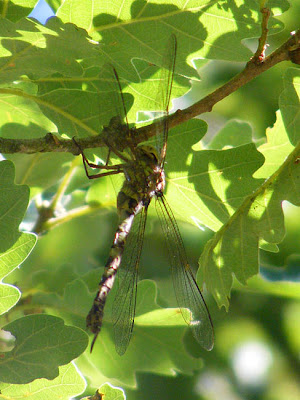 The Western Spectre is not threatened in France and its reputation for rarity is probably down to its very discreet habits, keeping to the shade and amongst the vegetation, making it difficult to spot even though it is a large dragonfly. It has, nonetheless, been listed as Vulnerable on the European Red List. I suspect that this may be in part because this is the one widespread species of Boyeria. The others are confined to islands and are critically endangered.

How far north do they migrate?
Seems odd they head that direction
as cooler weather approaches.

Good camouflage - she looks like a small branch in that oak tree.

Sheila: they are not migrating, but expanding their distribution every year towards the north. Many dragonfly and butterfly species are doing this, almost certainly in response to climate change i.e. the north is getting warmer. Western Spectres have reached Basse-Normandie and southern Germany in the last 10 years.

Diogenes: yes. I hadn't realised just how well camouflaged they were until I took these pics. I knew she was there because I had been watching her hunt, then saw her land. Otherwise she would have been completely hidden.

Amazing camouflage. What do they hunt? Something like mosquitoes, or flies?

Emm: yes, I imagine flies (which includes mosquitoes) are their main prey. I've never actually seen one with prey to be able to identify it, but I have seen other similar sized dragonflies with Flesh Flies (which are the size of a Bluebottle).