This bamboo has been in the same pot for 10+ years. It was well and truly time for it to be split up and potted on. The roots were creeping over the top and there was no room to hold any water. The bamboo was suffering from the overcrowding and the dry. 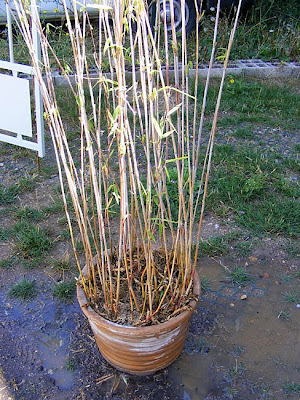 We didn't want to sacrifice the pot, which is terracotta and a good size, so after soaking the whole thing over night we tried blasting the soil out with the pressure washer, in the hopes that the roots would then loosen their grip on the pot. 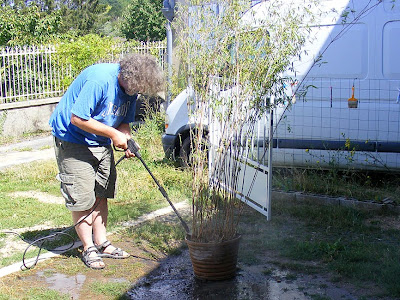 No chance! So then Simon drilled a larger drainage hole in the bottom and tried thwacking the root ball from underneath. A few pebbles fell out, but otherwise no movement, so we retreated for a think. 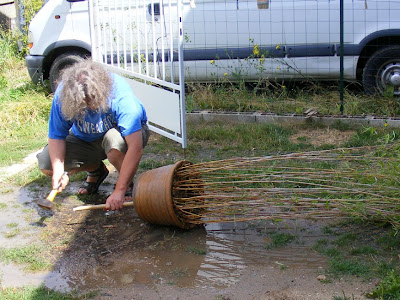 The next day, it was time to get serious. Out came the 'Alligator', a reciprocating saw, which will chew through anything. It duly chewed through the bamboo roots... 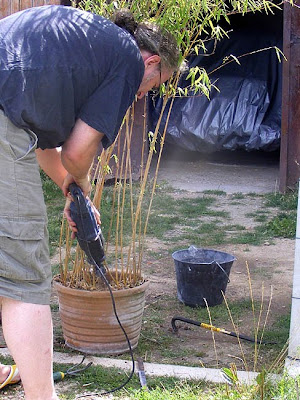 ...but they still weren't going to come out without a fight! 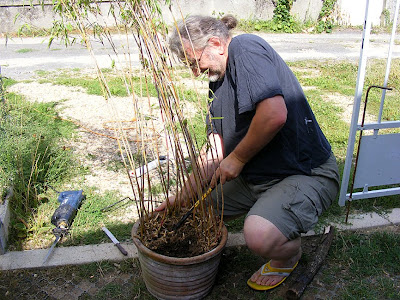 Once Simon got that first little bit out though, the whole thing lifted out and he was able to saw it up. 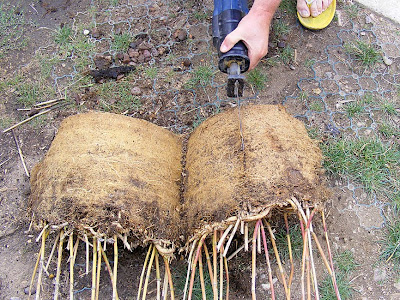 Crude, radical, but ultimately effective, saving both pot and the 'bush'. The pieces have now been planted in three pots in the hope that they will form a light screen between us and the street on our front courtyard. 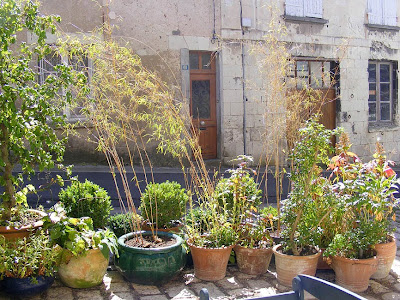 The original pot now holds a promoted Osmanthus x burkwoodii, visible over the corner of the green bench seat in the foreground.

Wow...the pictures of the roots are, amazing. They were completely root-bound. Can the bamboo survive your winters?

Last year you lost a couple of potted plants to a" five-finger discounter". Do you still secure your pots to prevent them from walking away from your courtyard ?

Diogenes: many Chinese plants are very hardy, and this bamboo is no exception.

Beaver: yes, they are still all wired together. This year I only lost a single plant, an Evening Primrose which was uprooted and taken away (so no great loss). The culprits both years have been guests at a party held in July by people who live over the back of us. Rearranging the neighbourhood's pot plants has obviously become a tradition, and this year I was not the only victim.

Ingenious. I love y'all's penchant for repurposing, renovating, and renewing. Bravo. I know I certainly learn a lot. I have a very random suggestion....Y'all ever think of pulling some of your best photos together and making a calendar or postcard prints for sale? I love y'all's Loire shots and especially the seasonal scenes of Preuilly. Like I said just a random thought. I know I would buy one. =)

Jenny: We do have postcards. The first set were of scenes of Preuilly, the current ones are of Célestine. We use them for notes and as PR material. Simon designed calendars a couple of years but we never got round to getting them printed. Maybe we'll have something for readers to purchase in time. Anyone whose interested can email us - the more interest we get the more likely we are to print.