Where we are at

Work continues on the upstairs bathroom, and so far the decision making about what goes where is just keeping ahead of the execution of the work. Which is the right order, but probably frustrating for Stéphane, as he has to keep asking "have you decided where...?".

Still, as Susan told him yesterday we are just preparing him for other clients: at least we can make decisions when required, and then don't change our minds after making changes become difficult (most of the time: it has happened, but that's life). I am pretty sure that in the world of renovating houses for people half the clients will just give an idea of what they want and live with the results, whilst the other half micro-manage. We make sure we are involved in every detail of the final product, but once we have decided what we want we ask if it's possible, feasible, and not too much added work, then let him run the show. I can then concentrate on asking what to some might seem silly questions, but Stéphane is patient with me and explains what is happening as he goes along. This means I am learning stuff, slowly, which I might be able to use later.

Our new bathroom sink.
The right shape and 50% off the price! 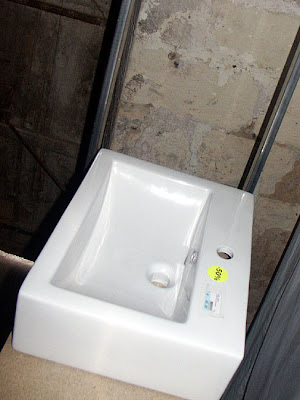 On Wednesday we went shopping for lights, heated towel rail, and a handbasin for the bathroom, and high density insulation for the landing at the top of the stairs. The lights, handbasin and insulation we have purchased, but the towel rail we finally decided on as being the closest to what we are after was out of stock (this is a good thing, as it allowed for reflection and a change of mind).

The insulation for the landing at the top of the stairs is a slight problem: the house predates glass wool insulation (by about 500 years) so no allowance has been made for the 200mm (8 inches) of space needed to prevent heat loss. The maximum we can fit in there is 100mm, and even that makes the roof awfully low. Luckily there is a new range of glasswool insulation which is 30% more efficient than previously, so although we won't have the European standard amount up there, we will be closer than we feared we would be.

While we were in Leroy Merlin we also priced sliding doors for the large cupboard, which although will be more expensive than we hoped are less expensive than we feared. We also looked at regular doors and benchtops, both of which we have yet to make a final decision about. The custom made sliding doors must be ordered soon, because they are on special at 40% off, which is a quite considerable amount of money.

A table full of light fittings. 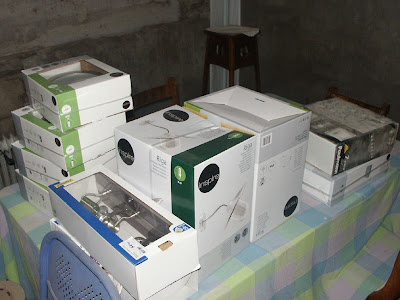 At the moment, our bathroom plan looks like this. We're not definite on the colours, but at least we are sure where the doors, plumbing and electrics will go. Just as well- we start closing the walls tomorrow. 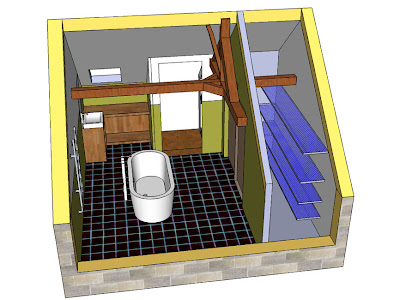 Just a question: do you ever shop at Lapeyre for doors and other items?

Ken. Not even a WC. Just a bath and a handbasin.

We bought our new back door at lapayere, but the internal doors ar all (so far) Bricodepot cheapies.

Getting that sink at 50% off is a great deal, as that style seems to be very popular now. A stylish restaurant near us just redid their bathrooms with those...

When does the door offer finish!!????

Tim: You have to order by 13 September

folding sliding doors
I want to make sure I understand where exactly you want to mount the shutters. Do you want them mounted on to the sliding doors themselves or so that they overlap the entire opening of sliding doors?