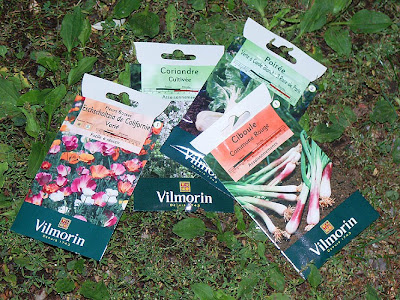 Yet another new thing I have learnt today. DCiane

Thanks for this, Susan. "The vegetable garden" by MM Vilmorin-Andrieux was reprinted in the US in English and covers Angelica to Yam in 597 pages (intro by Wm Robinson). It seems very thorough. I just looked at my copy and asparagus, for example, gets 8 pages. I wonder how many of the varieties that grew in Robinson's time are still in the Vilmorin catalog today?

I had never heard of Vilmorin. But, I like to garden, so I'll have to pay more attention at the nursery. I think the most common seed brand in the US is "Burpee."

Fascinating about sugar beets being developed during the blockade! - necessity is truly the mother of invention.

Diane: glad you found it informative.

Carolyn: it would be quite interesting to know, wouldn't it? Perhaps I should email them? They will either ignore it or be thrilled that someone is interested.

Diogenes: beets didn't get really productive until the mid-19thC but the impetus for the work to improve them came from the blockade.

As long-term veg growers, Pauline and I have noticed that Vilmorin, Baumaux and even Lidl seed far outstrip the English suppliers for varieties, and perhaps more important... successful germination!!
Baumaux even had the Heinz tomato varieties three years back... different toms for ketchup and Baked Beenz!
There's good reading in a seed catalogue.