I wrote a couple of days ago about the St Andrew's cross in our attic, having previously written about the fact our house was at one time bigger than it is now.

These matters are not unconnected.

In our attic we have 1½ St Andrew's crosses which is unusual, because no-one ever builds half a St Andrew's cross. They are always built complete and in the open part of a span, never against a wall. which means at one stage we had two of them. Thursday's photo was of the complete structure, the following photo is of the half cross.

I have outlined the carpentry: much of
it is hidden under a layer of render 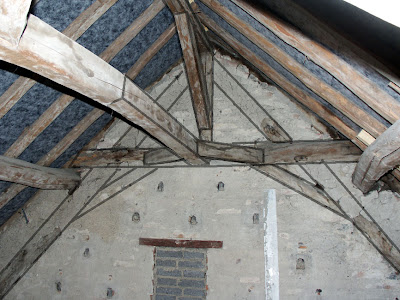 Just in case you are still a little in the
dark, I have modelled a full roof support 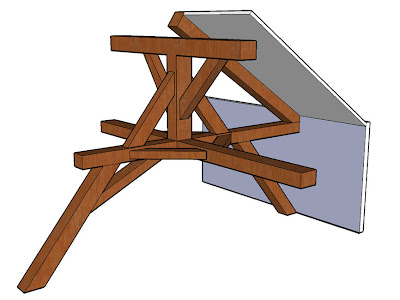 According to M. Galland, the part I have
coloured red is the St Andrew's cross 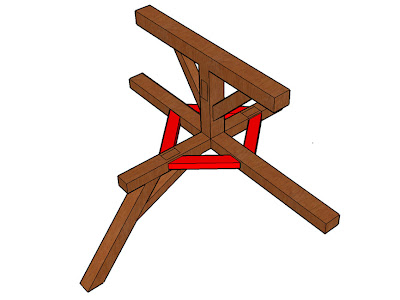 There are a couple of things worth noting here:
The top photo was taken when we cleared that wall before commencing building a frame for the insulation.The carpentry built into the wall will then no longer be visible, but the parts which protrude from the wall will be.

Email ThisBlogThis!Share to TwitterShare to FacebookShare to Pinterest
Labels: Bathroom, Our house in Preuilly, Roofing

Wow, that's a mouthful, but if you can make it work you may be interested in the description of St.A's cross. Looks like a fascinating book.

Jocelyn: that is exactly the sort of thing I would have expected to see when people talk about a St Andrew's cross: a big " X " . Something our roof timbers have precisely none of.

Simon.... do you think that the St Andrews X is made up by the bits of the two main beams within the wooden frame... I was looking at http://1.bp.blogspot.com/_olWLOLXRIu4/TGw9TiL4gNI/AAAAAAAAGdE/Zkk2Slc9E2k/s1600/bathroom+ceiling.jpg when I thought this... may well be wrong, but there is a lot of the Scottish flag about that shot?
Full of headcold at the moment so thoughts come slower than usual.

Having checked sources I wonder if there was some misunderstanding, especially if your roofer was pointing rather generally upwards towards the truss buried in the end wall? My French architectural 'Bible' for example shows the Croix de St. André as a kind of 'Contrevent' (i.e. wind-brace), used in the vertical axis to stay the Fermes (trusses) in relation to the Panne Faîtière, the highest longitudinal member, which supports the rafters. In other words it helps keep the trusses vertical. Also, as you note, the arms of a St. Andrew's cross should intersect.

The most relevant diagram shows a fully intersecting Croix de St. André between the Panne Faîtière and another lower longitudinal member which runs horizontally and connects the tie beam ('Entrait') of each truss. I have also found diagrams (French) where the St. Andrew's cross is used as part of the bracing system for 1st. floor wall timber framing – as much seen also in traditional English timber-framed buildings.

Putting all this together I wonder if your roofer was referring to the vertically orientated brace between the Poinçon (vertical post) and the Panne Faîtière? Of course, given that there is a lot of regional variation in how terms are used it is quite possible that what you show in red is locally called a St. Andrew's Cross, even if it is bracing in the horizontal axis and is not strictly speaking one at all.

Anyway the fact remains that a truss would not normally be placed right up against a gable end and would be a waste of timber, time, and money. Setting aside the St. Andrew's Cross issue, position, and an infill of brick is a pretty convincing argument for a longer roof and building.

Perhaps it would benefit in looking at the "Celtic Cross". This "circle" imposed on a cross is also referred to as a "St. Andrews Cross" This circle could also have been a square it seems to me.