The Gateway to Arcadia

There is a pretty little village, off the beaten track for us, called Monthoiron. We only go there on our way to Brico-Depot in Dissay, but one day we should really take our time and visit properly. 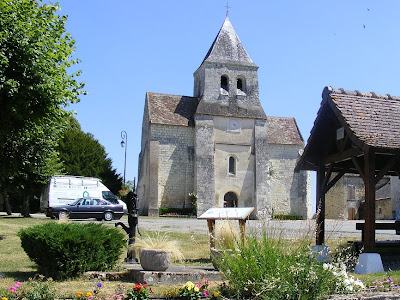 It bills itself as le Portail à l'Acadie poitevine. There are many places in the nearby département of Vienne, between us and Poitiers which have strong connections to the early French settlements in North America. The US state of Maine and the Atlantic coast of Canada (New Brunswick, Prince Edward Island, Nova Scotia) were once Acadie and many of the farmers who lived there came from around the little towns and villages in the central west of France like Pleumartin, Archigny and Monthoiron. In the 17th century, England and France jostled for control of Acadie. Many Acadiens fled – some south to Louisana, where they became the Cajuns, some back to the districts in France that their families came from. It is a sad and romantic story which has captured the imagination of songwriters and historians. A good outline of the story and its background can be read on Wikipedia (in English).

Inside the church, looking up to the gallery. 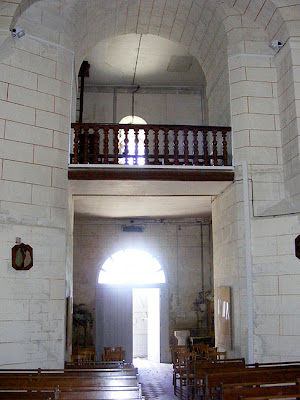 Even without this interesting historical connection to feed the imagination, Monthoiron is a particularly attractive village, set overlooking the lush prairie land of the Clain River valley. The church, on the market square, is absolutely fascinating, with some unusually good polychrome statuary and a sloping gallery which we think may be unique – we've certainly never seen anything quite like it before. There is an array of benches that you have to climb over to get a seat in any but the middle row. Did only the men sit up here in times gone by when women wore cumbersome skirts and weren't supposed to show an ankle? 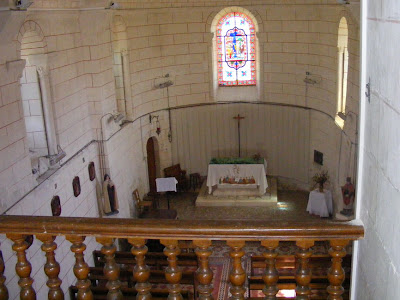 The excellent leaflet (in French) available at the entrance to the church explains that during the Wars of Religion in the 16th century, the nave of the church was destroyed and never subsequently rebuilt. Due to the disappearance of the nave, one enters the church directly at the transept and immediately beneath the bell tower, with its massive pillars. The considerable height of the tower is obscured by the gallery built in the 19th century to overcome the lack of space.

The stairs to the gallery 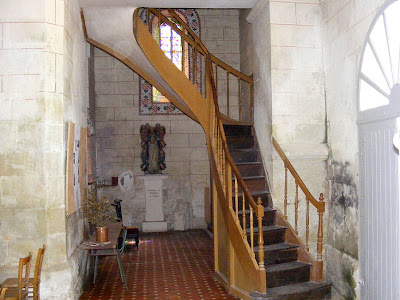 2 minor points re Acadie... the people didn't leave for Louisiana on their own... they were forcibly resettled by the victorious British.

And it's Prince Edward Island...

I always enjoy dropping by your spot on the web to see what's up on the Claise!

Rob: Thanks for the correction and glad you enjoy the blog.

I don't think you can be right about the forcible resettlement to Louisiana - after all, the British didn't own it at the time. The Acadiens seem to have ended up in Louisiana through choice after being expelled from Canada to what was known as British North America (ie New Hampshire, Connecticut, Pennsylvania, Maryland, Virginia, the Carolinas, etc) and being unable to return to Acadie. Not all Acadiens were expelled. Some stayed, some left before it got to that stage.

You are of course quite right about PEI.