3 Traction Avant Faux Cabriolets lead the pack down the straight. 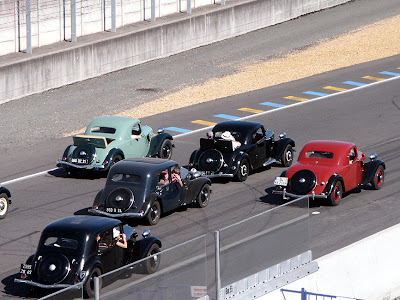 I am not a huge motor racing fan, but the book caught my imagination and has stayed with me ever since. Words like Arnage and Mulsanne excite me - little did I know they they are the names of villages that the Rolls-Royce and Bentley company named their cars after - I thought the various corners and straights were named after the cars.

Yesterday I drove down Mulsanne Straight. I will repeat that, because it is essential you realise how important it is.

I drove down Mulsanne Straight.

In my Renault Megane Scenic at 90kmh, I have to admit, but I did drive down Mulsanne straight. It isn't called that any more, but in my mind.. (you get the picture)

A whole racetrack of Tractions 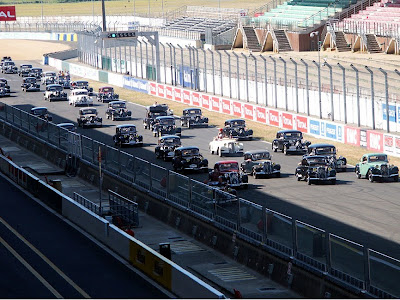 Other things we did yesterday was look at hundreds of Traction Avants at EuroCitro's 90th birthday of Citroën big bash. If we had bought a car last month, registered and spent three days camping at Le Mans (which I have to say looks rather fun) we could have driven around the Bugatti Circuit, which includes part of the 24 Hour track.

We have hundreds of photos of Citroëns, and we have just shown a random collection here. We are both extremely tired but it doesn't matter. 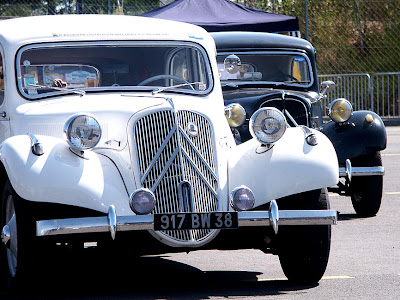 Because today I drove down Mulsanne Straight.

I haven't driven down it in a car, but would 65mph in 1966 with two up on a Lambretta Slimstyle 175cc. do? It seemed fast then and I might add that the pillion passenger did not know how fast we were going. She has not divorced me yet.

Anon
Were you in the approved knees up around your ears, chin on the handlebars position that so many scooter riders adopt at speed?

We would normally ask for photografic evidence, but for the sake of matrimonial harmony, we'll skip that one. It's an impressive effort though!