My nuts are no good !

I've just started harvesting the billions of hazelnuts we have on our 6 noisetiers. On my way back from the orchard with a bucketful, I ran into one of our neighbours. She picked over the top layer of my hazels and pronounced virtually all of them pas bonne.

A box of noisettes (hazelnuts) 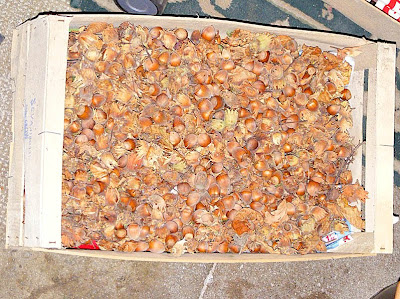 I asked her how I could tell which were good. Sometimes it's perfectly obvious - if they have a petit trou, then they've been weevilled and there won't be a useable nut inside. Mostly though I have no idea how she could tell. She was right every time we cracked one to see whether there was a nut inside or not, but the good shells look exactly like the bad ones. We discussed it a bit, but it seems she just knows and I will just have to learn by experience.

She tells me that it's been a bad year for hazels all over France. Her brother, who lives further north, has had the same problem, with many nuts being empty of kernels.

Apparently I must leave them to dry out for some weeks before tackling the task of cracking them. It's time consuming and surprisingly hard work, so if the resulting nut count is meagre it will be depressing.

Some of the pears.
A mixture of Williams and Beurre Hardy. 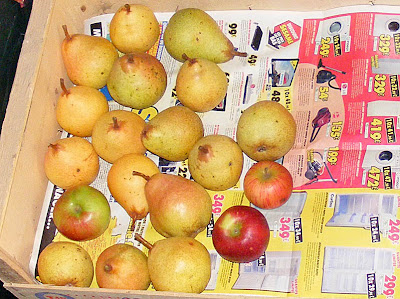 I've also picked almost all of the pears. It was that or lose them to a woodpecker (I think) who ruins them by pecking into and eating about a quarter of a pear, knocking them to the ground in the process. Every day for the past week or so I've found three or four pears in this state.

Yum. The pears look delicious. Can't you offer the neighbor a bottle of wine to come over and tell you which hazelnuts are good so you don't have to crack them all open? I'm a wasteful American, I know, but I'd hate to crack thousands of nuts to get a handful. I'm glad it was Susan who wrote that headline instead of Simon! Ha

Paulita, that's exactly what I thought, but, of course, I am a dirty-minded hyphenated American!

I did check to make sure this post wasn't being written under my name...

I believe that you owe me a new keyboard. I made the mistake of drinking my coffee whilst reading my daily familiar blogs and guess what happen :-) LOL!!!!!

I share in the hazelnut frustration. I was so happy to have 15 trees in our yard. But I soon found out: what the weevils don't get the squirrels will.

We have a single (or single pair) of red squirrels around, and he/she/they are very active around the hazels (I only ever see one squirrel at a time, so I don't know how many there are).

And the tell tale signs of broken shells under our trees.

You must know, that as I write this, I am hearing Sir David Attenborough saying "squirrel." To my ears, it sounds like "squiddle."

i'm excited about your hazelnuts. the best, most unusual thing i know to do with them is to serve them in a salad with fresh figs, chiffonade of mint, balsamic vinegar and cracked pepper. heaven, and truly cuisine dolce far' niente.

do let us know what you do with this bounty!!!!