Ken posted a comment yesterday asking about the difference between UK and French paint, saying that he had heard that paint sold in the UK is much higher quality. I have heard and read the same thing said.

You see paint being sold in all sorts of places in the UK; from cheap paint in supermarkets, to boutiques purveying the expensive (and too trendy for my tastes, no matter how good it is) Farrow and Ball paints, and a whole range in between. I would hazard a guess that Tesco's home brand paint isn't terribly high quality and isn't the paint the people Ken refers to are talking about.

I painted the blue shutter in June 2007.
It is still as good as new. 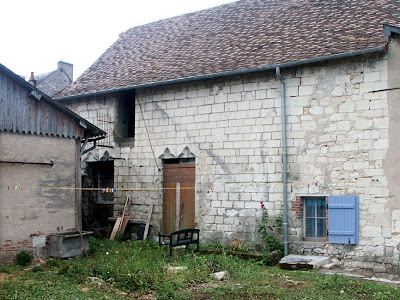 Having never bought paint in the UK, I find it hard to say for sure; but athough I have never painted houses in the UK, I have painted houses in Australia and the paint in France acted like I expected paint to act. Susan says she can't relate to the argument that French paint is thinner than UK paint, either, and (as ever) I have a theory about that. Maybe UK residents who also own a house in France have never painted their UK house in 35°C heat, the sort of temperature where paint gets runnier. French paint is too thick to use when the temperature is only 12°C, as I discovered last year. Or it may be that French paint is fourmulated differently because it has to cope with more sun, more snow, and less rain.

I made an early start on these windows one day last year:
At 8.00am the paint was so thick it would hardly come out of the can. 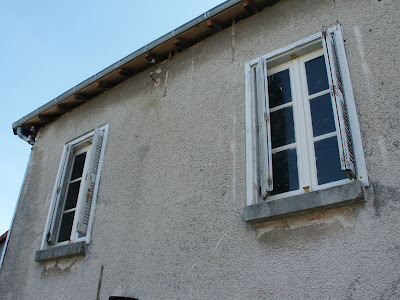 I have no issues with French paint - but it does give a different look to UK paint - a more powdery finish, which I actually quite like. That could be because the paint I have seen used in the UK is super high gloss, and in France the norm is to choses a satiné or mat finish.

Ot it could be the NAGAB syndrome at play...

NAGAB syndrome ??? I Googled it and it came up with a link to Days on the Claise. !!

Not As Good As Blighty.

I have just come in from painting, and believe me - if the paint had been any thicker I would have needed to put it on with a plastering trowel.

I it does depend on where you buy the paint and what brand too!!