One of the trees in our orchard is marked on the plan we were given as a pomme-poire (=apple-pear). It has very attractive golden apple like fruit. I had a suspicion that it might be what is known in Australia as a nashi, and a little research on the net proved me right.

In the US they are known as Asian Pears, and they are a true pear, not an apple/pear hybrid. Apparently there are many varieties, and three basic types. Ours are the sort that look like russet apples.

Enough to tempt Atalanta herself 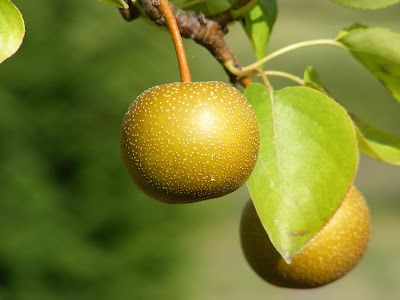 It's a long time since I've eaten a nashi, and I remember being pretty underwhelmed* – but it's amazing what a difference being freshly picked and not cold stored can make to a fruit's flavour. I've had Golden Delicious apples from the farmers' market, and yes, contrary to most people's perception of this ubiquituous apple, they can be golden and delicious when fresh. (Just as well, as we also have two trees of this apple in the orchard.)

The nashi crop won't be ready until mid-autumn I believe, but I've cooked a few little windfalls , along with some baby pears, in heavy red wine syrup. Except for the shape, the nashis were indistinguishable from the pears (well, perhaps not quite as flavoursome, but very like in texture) and very cute on their long stalks, ideal for picking them up to eat from the fingers.

The things people like about nashis seem to be that they are not prone to pests and diseases (this seems to be true in our orchard); crop heavily (we have a good crop, but not groaning branches) and can be left on the tree to ripen (unlike pears, which need to be picked before they are ripe). The things people don't like so much is that unripe nashis don't taste of anything (true in my experience); over ripe ones look perfect, but will have mushy brown centres; and they produce a lot of juice when cooked, making them not suitable for pies (although I've found some appealing cake recipes that feature nashis that I will be trying in the autumn when the main crop comes in).

I don't think I have ever knowingly eaten one of these or seen them for sale. Must look out for them.

Nashi is the Japanese word for this fruit.