Actually it was in the right shoulder blade, but that's a mere detail.

We get a lot of interesting species of insect around here, many of which are normally restricted to coastal areas. Because these species have very precise ecological requirements and as their natural habitat is increasingly destroyed by being built on or intensively farmed, they are becoming rarer and rarer. The reason they turn up here, even though we are 200km from the coast is because of le Parc Régional de la Brenne, with its large areas of wet grassland and marsh, similar to coastal grazing marsh. 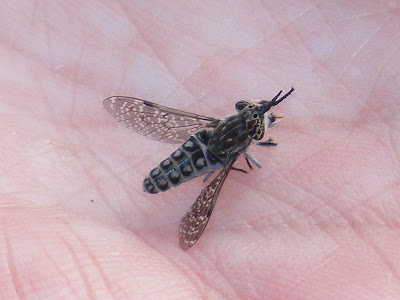 The other day Simon shouted to me to slap him on the back as he was being bitten by something through his T-shirt and it was very painful. The culprit turned out to be a 9mm long female Haematopota bigoti, the Big-Spotted Cleg. I don't think it has a specific French name, but in general terms, it is a petit taon. H. bigoti is one of two rare coastal species of small horsefly (known as March flies in Australia) that I have recorded here. I love them, and think they are exceptionally beautiful with their psychedelically patterned eyes (but then, I rarely get bitten by them).

Do you think the fly did know Simon was an Australian and decided to bite him because some sort of alien was infringing and trespassing on his/her domain? Or just because he smelled delicious?

Word verification is askinga. May be I should have asked her? That first name sound Norwegian.

I find slugs beautiful. But it's hard to think of a horsefly in that way. Beautiful is a beautiful does, on some level.

We've had clegs in Epeigné, whether it was this precise type I'm not sure but gives a very nasty bite.

Jim: There is a very common and ubiquitious species H. pluvialis / Notch-horned Cleg / Taon des pluies, several widely distributed but less common species and a couple of species that are rare. Unless you have them in the hand and know what to look for under magnification you can't tell what you've got. It's likely that you have about 6 species, of varying abundance.

CHM: I expect Simon was just warm, moving a bit, and breathing out large quantities of CO² – that's what attracts them.