Ratatouille (pronounced rhuh-tuh-too-ee) is the quintessential southern French late summer vegetable stew. It uses all the vegetables that one hopefully has a glut of by the end of August – aubergines (eggplant), zucchini (courgettes), onions, sweet peppers (capsicum) and tomatoes (pronounced tom-AH-tohz, I think you'll find...) and seasoned with garlic and basil. Simon eats almost nothing else when he is on his own in September. 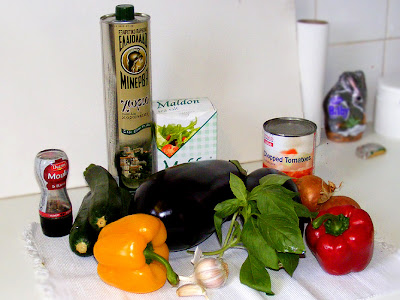 There are lots of fussy recipes which instruct you to cook all of the vegetables separately and only mingle them at the end. Who can be bothered washing up 4 saucepans instead of just one, for goodness sake! The trick is to cut the vegetables into big chunks eg the aubergines should be quartered lengthwise and cut into 2 cm slices crosswise; the peppers into 4-5 cm squares; the zucchini into 3 cm crosswise slices. That way they will all retain their individuality and not turn into pulp. 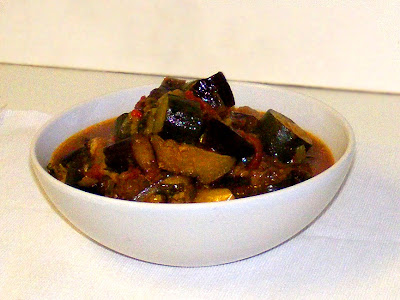 I'll give you the toe-MAH-toes (even though I say toe-MAY-toes), but ratatouille is [rah-tah-TOO-yuh). The [a] vowels are significant in French and pronounced [ah].

Susan, here's some information I found on a web page about the French A vowels:

The pronunciation of the letter A in French is fairly straightforward. It is usually pronounced more or less like the A in "father," but with the lips wider in French than in English... An a with the accent grave (à) is pronounced the same way.

The [a] is sometimes pronounced further back in the mouth and with the lips more rounded than for the [a] sound described above above... This sound is becoming obsolete, but technically should be pronounced when the letter A

Laura K. Lawless is the author. Laura has an extensive site about French language and pronunciation.

I wish I could hear how you pronounce the [uh] sound you put in ratatouille. Maybe it's the same sound I would represent as [ah] — the A in father (actually, also the O in follow.

Oh, yum. I'll have some, please. Oh wait, we have all that in our garden, too!

Ken: The two 'o's in tomatoes are two different sounds in Australian English you know :-)

My 'ah' sound in tomatoes could also be written 'ar'. For me, 'uh' and 'ah' are the short and long version of the same sound - 'ah' is said with the mouth slightly wider open.

I'll try and remember to discuss this with you next time we speak - if you haven't completely lost patience with it all :-)

Simon tells me he is astonished to learn that this dish is not called Rat Tool (he is joking of course).

Well, Susan, the fact is that there is only one A vowel in French. It is somewhere between the A in rat and the A in father (American pronunciation, I admit). The only way to really say how the sound is pronounced is to say it in French. Unfortunately, Blogger does not support sound files. But Laura K. Lawless's site does play sounds. Other sites do too.

Yes, the first O in tomato is different from the second O. English has a way of substituting a neutral vowel for the actual vowel in unaccented syllables (like the first syllable in tomato). So we say [tuh-MAH-toh] or [tuh-MAY-doh]. French doesn't substitute neutral vowels for actual vowels. In French, an A is an A is an A (that is, [a] is always [a], never anything else). Ratatouille is [Ra-ta-tuj] in the IPA alphabet, three syllables. In my own French-to-English transcription system, it's [rah-tah-TOO-yuh], where the capital letters respresent the stressed syllable. The A vowels remain [a] (not [uh]) even though they are unstressed.

My word verification string is "consi". That sound like "concis", which I am not.

Oh, in standard American English, the Os in follow, cot, dot, pot, not, etc. sound the same as the A in father. Father and bother are the same except for the initial consonant.

>>Father and bother are the same except for the initial consonant.<<

I trust you didn't, Fawlty-style, put Basil in the ratatouille?