Our house came with an assortment of shutters. One is metal, the others are oak with a fixed louvre arrangement in pine so they admit a breeze and a little light (many people have their windows open, but the shutters closed in hot or humid weather). Some of them fold back on themselves to sit inside the window surround, some of them fold back to sit flat against the wall either side of the window and we get to use the charming 19th century metal ladies who fold up to hold the shutters in place.

The wooden ones are tatty and falling apart and in desperate need of painting. We have guests arriving in September, and we want to paint the guest bedroom to make it more pleasant for them. Painting the walls makes more sense if you paint the internal window frames as well, and as they're attached to the window frame outside which are attached to the shutters.. it makes sense to do the whole lot. 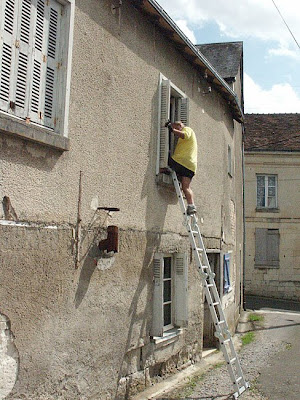 He removed the shutters on the spare bedroom and discovered that even though they looked an odd assortment they are a pair, but one was hung upside down. Taking them out of the window fame was interesting - the screws were rusted to the hinges, but not terribly well screwed into the wood. I assume that this was the reason one was hung upside down - the screw holes need filling before they will take a screw, and it was just easier to make new ones. This means replacing the hinges and fastenings so that they operate smoothly, and drilling out the screw holes and gluing in dowels in the window frames so that the whole arrangement can be rehung. Surprisingly, the shutters are in a better condition than the windows they protected were. I'm not sure I understand that...

Carefully 'whisking' away paint on the edge of a shutter,
which is bungee corded(ocky strapped) to a sawhorse.
Note the absence of carpet slippers and the
presence of the AGI T-shirt - this is serious stuff. 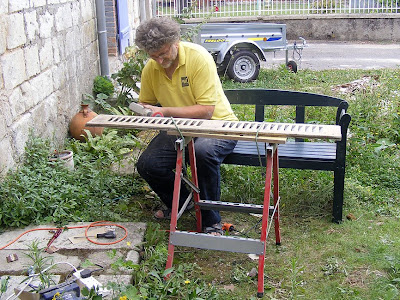 Three days into the job, and he has sanded back the window frame inside and out, and sanded off the two halves of one shutter. The paint is flaking in places, but mostly is as hard as iron (it's probably lead based paint). The corners of the louvre slats are an added challenge, being awkward (almost impossible) to get at. He's resorted to being fairly brutal and is using a circular nylon brush on the end of the drill followed by a metal file. Anything that survives that treatment is then dosed with paint stripper and scraped.

It is nasty dusty work, with some health risks due to the lead in the paint (which can be mitigated somewhat by damping everything down). On top of that, Simon has bursitis in his left elbow at the moment and holding anything or just moving his arm is painful. As it happens, I have bursitis in my right elbow, so he needn't worry that I'm having any more fun than he is.

A quarter shutter, fully sanded and ready to to have
the gaps at the ends of the slats filled up. 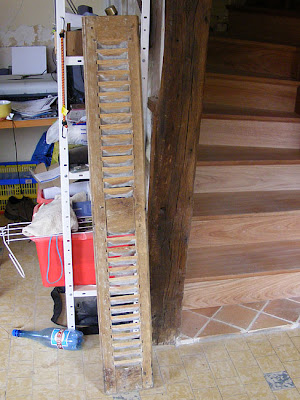 Looking at their flaking paint, bent rusting hinges and eccentric hanging arrangement, I had assumed that we would have to replace them and I'm really surprised at how good their condition turns out to be, and how well made they are. Despite the discomfort he's doing a really careful, thorough job on them, and I am confident the shutters will look as lovely as the windows he did a couple of years ago.

Sorry to hear about your poorly elbows. It sounds painful but at least one each is fair. Hope you're better soon. (The result of too much hard graft, perhaps?)

posed to the left of the chef d'oeuvre staircase, i see. both looking fab.

amazing! I would have lit a match and just lived in a tent. Going back to read and view the pictures about the windows was just shows what a daunting task you've had.

Keep it up and baby those elbows.