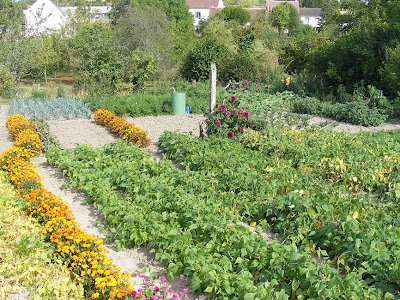 A potager in Preuilly is not self-consciously designed to be a decorative garden with some vegetable produce as an almost incidental bonus. A potager is simply a vegetable garden, but for all that they have a certain style. Plants are laid out in neatly tended rows. Flowers and fruit are almost always included, and the whole effect is pleasing to the eye, and a reflection of the diligent attention they get. They always give the impression the owner is feeding a family of about 20 with the quantity that is planted, but I think many people put in enough so that if they have some failures it's not a disaster, and everyone is very generous with offering their produce if they have surplus. At the moment, we are offering plums to everyone. The other day in return for some plums and beans I received about 20 little strawberry plants. No one can give away their zucchini (courgettes) though, as everyone has surplus, even with this dry weather. 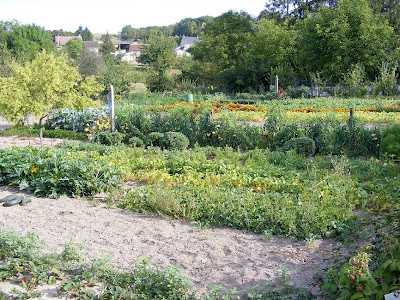 Yesterday morning I went down and photographed our neighbour Monsieur Q's potager, which is an exemplar of the working French vegetable plot. Monsieur Q often stops for a chat on his way past our house, and he inspects our potted tomatoes and peppers in the courtyard and tells me about the progress of his tomatoes. He's had several this year that have been just under a kilo! And he tells me he has not fertilized at all. (Naturally, he is not the slightest bit interested in the merely ornamental plants that make up the bulk of the garden in the courtyard, except to tell me that the Contorted Hazel looks diseased.)

Monsieur Q's zucchini are clearly getting out of hand 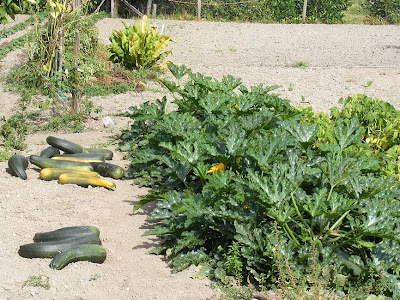 The French eat vast quantities of lettuce of many varieties. Whenever you are offered lettuce from a French person's garden, expect to receive at least two, as they assume you will eat that much lettuce within a couple of days.

Cos lettuce, which copes better with the heat I think,
and tomatoes. 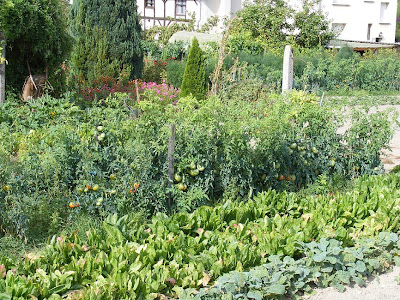 There certainly are some fairly hefty tomatoes (about 15 cm - 6 inches across) in Monsieur Q's garden, at least two different varieties. Note the powdery blue blotches of Bordeaux mixture (copper sulphate) in the picture below, used as a general fungicide, and in tomatoes used especially to try to control blight (Australians who have never encountered the blights that affect the solanum family of vegetables, think Irish potato famine for an idea of how devasting it can be). Always wash tomatoes before you prepare them in the kitchen in France, because they will almost always be treated with a fungicide. 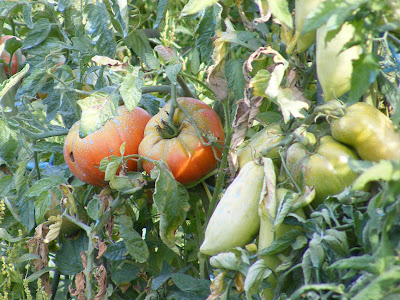 I also noticed eggshells on the tops of canes amongst the carrots. I had assumed this was protection against being stabbed in the eye when you bent over the carrots, but I don't know why only the carrots have eggshelled canes, or indeed, why there are canes in the carrot rows at all. It seems unlikely that it is a deterrent for carrot fly. 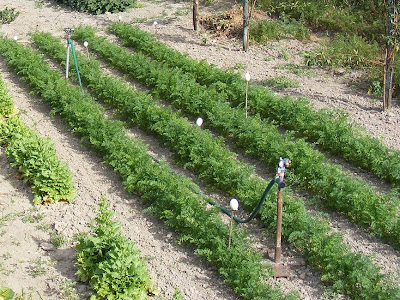 Email ThisBlogThis!Share to TwitterShare to FacebookShare to Pinterest
Labels: Food and Drink, Gardens and Parks, le Jardin, Pictures of Preuilly

Beautiful. Neat, productive, colorful. Soon dahlias will be blooming in vegetable gardens. Potagers are one of my favorite things to see in France, everywhere we go.

The medieval potager at the château de Chateaudun, not far from the Loire Valley, is extremely interesting. It is well tended, with signs telling you what the plant is and how it was used by our ancestors.

We got the idea for the layout of our jardin potager — four square plots arranged in a square with a one-meter strip of grass separating them (does that make sense?) — from the vegetable garden at the château in Fougères-sur-Bièvre. That's about 25 km north of Saint-Aignan.

Could the eggshells be there just to keep water from soaking into the wooden stakes from the top and rotting the wood? Stakes in our garden had cut-off plastic water bottles on them, I assume for that purpose. We replace those with glass jars. Egg shells would be more "organic," I guess.

Cos lettuce is known as romaine in France and in the U.S., by the way. And yes, French people eat a lot of lettuce salads, with nothing else in them except the sauce vinaigrette. I know a lot of Americans who find that strange. They want all kinds of other vegetables cut up and tossed with the lettuce in their salads. French culimary habits tend to emphasize one ingredient at a time -- salade verte or salade de tomates or salade de betteraves -- and not a jumble of things all tossed together as in America.

Ken: Monsieur Q came over this morning to see how his garden looks on the blog, as he doesn't have a computer. I asked him what the eggshells were for and he said it was a trick handed down to him by his grandfather. He says the Large White butterflies (Pieris brassicae / la Piéride du choux) are attracted to them and lay their eggs on the eggshells, which can then be removed before they turn into vegetable munching caterpillars.

You are right about the wonderful simple and delicious salads in France, but don't forget at the other end of the scale there are the salades composées or assiettes, which have lots of ingredients, artfully arranged on the plate, and equally delicious.

Makes me hungry, all that does!

We're having a good year for toms, too, but not so much for beans. I'm going to have to work on our layout!

Interesting idea, Susan, the eggshells. Wonder if it really works. We haven't noticed any or many caterpillars on our vegetables this year. Though I have found snails and slugs.

I love the lunch salads, which are a full meal. I was talking about entrée salads (tomates, betteraves, céleri-rave, chou, pommes de terre, carottes râpées, etc.), which can be served separately, or together but arranged separately on the plate and not tossed.

And then, especially, the salade verte that used to be (and in many homes still is) served after the main course and before or with the cheese. Normally that's a salade of nothing more than lettuce and vinaigrette. You don't get that course as part of a restaurant meal much any more.

Do you know the expression "fatiguer la salade"?

My word verification is "carblank". He he he.